Update Required To play the media you will need to either update your browser to a recent version or update your Flash plugin.
By VOA
14 September, 2014
51VOA听写整理，转载请注明出处。

Brain imaging was once thought to be too costly and difficult for widespread use in the developing world. But the technology soon may be available in poor countries. Brain imaging creates pictures of brain activity. It uses infrared light -- similar to the light produced by a television remote control. Brain imaging can identify the first signs of cognitive delays, mental problems, in newborns and young children. Such children could be suffering from malnutrition – a poor diet.

The technology has a long name -- functional near-infrared spectroscopy, or f-N-I-R-S. It involves placing an extremely small, soft helmet around a baby's head. Infrared light is sent through the bone protecting the brain. It helps to show whether babies are developing normally for their age. 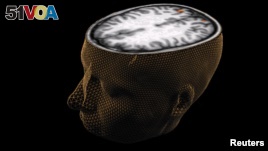 An undated image of the human brain taken through scanning technology.

f-N-I-R-S is considered safer than other imaging methods, including MRI or PET scan. And it also can be easily moved. The brain scanner equipment can be loaded into a vehicle. Health workers can drive it from village to village.

Clare Elwell is a professor of medical physics at University College London. She helped develop the relatively low-cost, non-invasive imaging technology. She says the device measures oxygen in the blood to learn how babies' brains are developing.

Clare Elwell led a study of the testing method in rural Gambia. The babies involved were between four and eight months old. They were examined three times over 15 months. Researchers noted the babies' reactions to different images and sounds.

"So if we present the babies with visual or auditory stimuli, then we expect certain brain areas to light up, essentially. We expect the oxygen to be diverted to certain brain regions."

She says that shows if those brain areas are fully developed or mature. And, she says, it shows if they are performing normally.

The babies looked at pictures of objects and people. Human speech and non-human sounds such as running water and bells tested the babies' hearing. And their brain recognition was compared to those of British children.

Clare Elwell says poor nutrition and childhood diseases threaten the African children. She says the goal is to identify babies needing to be better fed or treated for health problems that can harm brain development.

Words In The News

imaging - adj., making an image of a body part for medical purposes

scanner - n.,  equipment used to see inside the body for medical purposes

distribution - n., the act of giving or delivering something to people