Update Required To play the media you will need to either update your browser to a recent version or update your Flash plugin.
By Mario Ritter Jr.
03 February 2020


Americans have been hearing more about brain injuries after an Iranian missile attack on United States forces in Iraq.

The missiles targeted an air base were U.S. and coalition troops were deployed. The U.S. Defense Department reports that 50 service members were found to have suffered a traumatic brain injury, or TBI, after the attack last month. 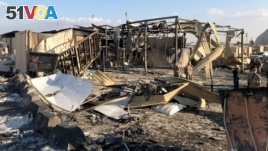 TBIs are not wounds like burns or cuts. They result from being near an explosion or a forceful strike to the body. TBIs appear to take a long time for doctors to diagnose.

William Schmitz is a national commander for the Veterans of Foreign Wars. He told The Associated Press, "TBI is a serious injury and one that cannot be taken lightly."

Schmitz added that, "TBI is known to cause depression, memory loss, severe headaches," and loss of balance. It can also make the person feel very tired. Sometimes there are long-term effects.

U.S. President Donald Trump was recently criticized after he dismissed news of the injuries. The veterans' group called on Trump to apologize for what it called his "misguided remarks."

The missile attack took place on January eighth. Because the injuries take so long to appear, the Defense Department did not announce the first cases until one week after the attack. At the time, it said 11 people were affected.

Military officials now say 50 service members have been diagnosed and the number could increase. By January 28, 31 of the 50 had returned to active duty.

Details of the U.S. injuries have not been reported and the severity of the cases has not been made public.

No one was killed in the attack. It took place after a drone strike in Baghdad killed a top Iranian general who commanded the paramilitary Quds Force.

The recent history of TBI

TBI began to gain more attention after the U.S. military invaded Iraq in 2003 to oust President Saddam Hussein. After his defeat, resistance forces continued to use roadside bombs to fight U.S. and coalition forces. Survivors of such attacks not only suffered physical injuries, but experienced head injuries like concussions that have been linked to mental health problems.

"For generations, battlefield traumatic brain injuries were not understood and often dismissed," notes U.S. Senator Jeanne Shaheen of New Hampshire. She is a member of the Democratic Party.

Research has shown that the issue of TBIs remains poorly understood. The Defense Department has been studying brain injuries since the early 1990s. It established a head injury program that developed into the Defense and Veteran's Brain Injury Center. The center studies research findings related to TBI, such as possible links to behavioral issues, including alcohol abuse and suicide.

In January, one study suggested that military members with serious TBI were more likely than others to experience mental health problems. The study was a project of University of Massachusetts Amherst health services researchers.

Some experts are linking long-term health effects to smaller explosions that take place, for example, in artillery training and from small, hand-held rockets.

Riyi Shi is a professor of biomedical engineering at Purdue University in Indiana. He says researchers are "finding that even a mild blast can cause long-term, life-changing health issues."

A 2018 study by the federally-supported RAND Corporation found little research on the subject. There also appeared to be little understanding of the possible damage to the nervous system from repeatedly experiencing low-level blasts.

The same year, a research group called the Center for a New American Security also released a study. It urged the Defense Department to keep records of "any soldier, in training or combat, who is likely to be in a position where he or she may be exposed to blasts." The group called for brain imaging tests of soldiers to better understand how explosions affect the brain.

diagnose – v. to recognize a disease or condition by examining someone

concussion – n. an injury to the brain caused by sudden force