Update Required To play the media you will need to either update your browser to a recent version or update your Flash plugin.
By Anne Ball
09 May, 2016


In a surprise move, the acting speaker of Brazil's lower chamber of Congress called for a new vote in the impeachment process against President Dilma Rousseff.

Waldir Maranhao is the Acting Speaker of the Chamber of Deputies. He said there were problems with the way the lower chamber voted to impeach Rousseff on April 17.

The announcement came just days before the Senate was expected to approve putting Rousseff on trial. If that happens, she would immediately be suspended from her job for up to six months. 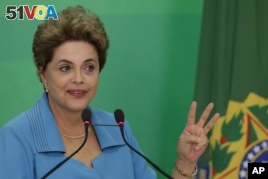 This move means the process will go back to the lower chamber. It could delay the process by days or weeks.

Brazil's business markets reacted to the news by dropping in value. The currency weakened as much as 5 percent, and stocks fell quickly.

Reuters News Agency reports the markets view the decision as decreasing the chances of a new business-friendly government.

Rousseff is fighting charges that her government broke fiscal, or financial, rules.

In a news release, Maranhao said the impeachment process should be sent back from the Senate, so the House chamber can vote again. He said the vote should happen quickly — within five sessions of the chamber after the case is returned.

It is unclear whether the Supreme Court, the Senate, or a majority in the House can overrule Maranhao's decision.

Speaking at an event in the presidential palace, Rousseff was surprised to learn the news of the temporary annulment.

Rousseff said the impeachment process has been suspended. But she warned cheering supporters:

"It is not official, and I don't know the consequences, so let's be cautious."

Rousseff has denied any wrongdoing. She has said she would fight it by all legal ways possible. What was not clear is whether she knew that Monday's announcement was in the works.

The impeachment comes as Brazil is dealing with a recession, a corruption investigation of top politicians and businessmen, and an outbreak of the Zika virus. The country is set to host the Olympics in August.

Anne Ball wrote this story with information from the Associated Press and Reuters News Agency. Hai Do was the editor.

We want to hear from you. Write to us in the Comments Section and visit us on 51voa.com.

impeachment – n. criminal charges against a public official when in office

annulment – n. the act of saying officially that something is no longer valid

in the works - phrase. something is being planned, being worked on