Update Required To play the media you will need to either update your browser to a recent version or update your Flash plugin.
By Jonathan Evans
28 January, 2018


When Oscar Niemeyer and Lucio Costa designed Brazil's capital, the city of Brasilia, their detailed plans did not include where to put food waste and other garbage.

The answer was the Estrutural garbage dump, which opened 67 years ago.

The dump is just 20 kilometers from the presidential palace in Brasilia. It has become the biggest landfill in Latin America.

But on January 19, the dump was closed. Governor Rodrigo Rollemberg opened a new landfill further outside the city as a replacement. The move has angered thousands of scavengers who make a living from the garbage. They go through the waste and take what they believe is worth saving.

At the opening of the new landfill, the governor said, "We cannot live with this open wound in the midst of our nation's capital, a dump where human beings put their lives at risk seeking a livelihood in an undignified way."

Since Brasilia was founded in 1960, it has grown to become the nation's fourth-largest city. It is home to about 2.5 million people.

For years, thousands of poor people searched through the Estrutrual dump for cans, copper wire or anything else that could be used or sold.

Generations of garbage pickers brought their children to work in the smelly, dirty landfill.

Rollemberg's plan is to employ the scavengers at new recycling centers, where the garbage can be separated in cleaner conditions. 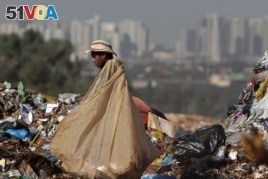 In this May 12, 2014 photo, Divan Rosa carries a bag loaded with recyclable trash as he works inside the Estrutual landfill in Brasilia, Brazil.

But people working in the old dump on its last day said they refuse to trade their source of earnings for government jobs that pay too little to support their families.

"I'll have to start working the streets looking through garbage cans," said Evando Souza. He worked at the landfill every day for five years.

Souza told the Reuters news agency that in a good month he could earn about $937. That is more than three times the lowest wages permitted under Brazilian law.

Souza told Reuters he was thinking of returning to his home state of Maranhão in northeast Brazil.

Environmentalists made a strong case for closing the old garbage dump. They warned that it was polluting Brasilia's water supply. The city has already been forced to limit use of water supplies because of extremely dry weather.

Brasilia is home to many well-paid government employees. Its many wealthy households produce a lot of garbage.

More than 1,200 tons of garbage were left every day at the old landfill.

Its closure will affect families living in a nearby community called Cidade Estrutural. Set up by garbage pickers, the community is home to an estimated 40,000 people. Many will have a hard time finding other jobs as Brazil slowly rises out of its worst recession in years.

Some members of the garbage pickers said they would rather stay working in the old dump than have the cost of a long trip to and from the new recycling centers.

Valdir Dutra, another scavenger, also spoke with Reuters. Dutra said he has searched through the dump's garbage for 16 years. He said, "Rollemberg hasn't offered us a real alternative. We cannot survive on that pay."

scavenger – n. a person who searches through food waste and other unwanted objects for something that can be saved or used.

household – n. people who live in the same house or home

picker – n. someone who picks up or takes something

recycling – adj. of or related to the process of reusing materials