Update Required To play the media you will need to either update your browser to a recent version or update your Flash plugin.
By Alice Bryant
11 April 2020


Emerson Barata makes a map of Sao Paulo's largest favela neighborhood, Paraisopolis. He then makes a mark for each known coronavirus case in the area. At the center of the favela of around 120,000 people, he makes four marks.

"It's going to get a lot worse," the 34-year-old tells a medical team that has gathered. Barata adds another two marks to the favela's outer areas.

He is leading the coronavirus response team in Paraisopolis. Along with the six confirmed cases, his team suspects another 60.

He is not connected to the Brazilian government. Neither is the medical team. Instead, Barata is part of a group of Paraisopolis residents whose deep distrust of the government has led them to deal with the crisis themselves. 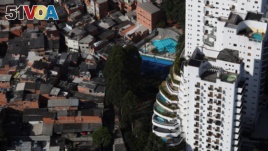 Brazilian President Jair Bolsonaro has dismissed the virus as "a little influenza" and told Brazilians to get back to work. But Barata has stayed awake many nights trying to get his favela ready for what he describes as a "war."

Barata did not say how much this would cost or how it was being financed. He only said donations have paid for some of it. Much of the money still needs to be raised, he said. The medical team is on a 30-day written agreement, which is likely to be extended.

Luiz Carlos is a doctor who is part of the hired medical team. "I think it's going to get ugly," he said. "This is a ‘little flu' that kills."

As Barata stood outside the repair business that now serves as the medical team's base, he said, "Favelas are going to be hit the worst."

Public health experts agree. The crowded living conditions, poor waste removal, lack of healthcare and other things make Brazil's favelas especially at risk for an outbreak of the virus.

In addition, many Paraisopolis residents work in the nearby wealthy neighborhood of Morumbi, which has the highest number of infections in Brazil.

Across Latin America, many of the cases were confirmed in people wealthy enough to travel internationally. But the virus is expected to hit the poorest communities the hardest.

Celia Parnes is the Secretary of Social Development for the state of Sao Paulo. She said the government was concerned about the speed of infections in favelas and was working to help neighborhoods like Paraisopolis with free meals and financial resources.

Parnes said public healthcare in Paraisopolis was no different from the rest of the city, claiming emergency vehicles do reach the favela.

But she praised the work of the residents' group.

In an emailed statement, Sao Paulo's city government said it has offered free food and other needs to residents of Paraisopolis. It said it also has sent around cars with loud speakers broadcasting the importance of washing hands and staying indoors.

Sao Paulo's water and waste removal firm said it was sending 2,400 water tanks to poor neighborhoods, including Paraisopolis, to help during the health crisis.

The population density in Paraisopolis is about the same as the Manhattan area of New York City, although most buildings are just two or three levels high. Residents complain that the water stops running after 8:00 at night. They also say garbage gets high along the wet, narrow walk areas that go through the community.

Unofficial power here belongs to the First Capital Command, Brazil's largest and most powerful gang, known by the letters PCC.

A member of the medical team said their work had the gang's approval. Reuters was not immediately able to contact any of the gang's local leaders.

favela – n. a low- and middle-income and unregulated informal settlement neighborhood in Brazil