Update Required To play the media you will need to either update your browser to a recent version or update your Flash plugin.
By Bryan Lynn
03 October 2022


Brazil's two top presidential candidates will face each other in a runoff vote after neither won a majority in Sunday's election.

Since neither candidate received a majority of support, a second runoff vote will be held on October 30. Nine other candidates from a group of smaller parties also ran in the election. 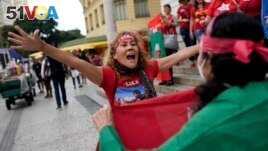 Several public opinion studies had shown the leftist da Silva leading the far-right Bolsonaro by 10 to 15 percentage points ahead of Sunday's election.

"This tight difference between Lula and Bolsonaro wasn't predicted," said Nara Pav&#227;o, a political science professor at the Federal University of Pernambuco.

Speaking to reporters, da Silva compared the planned runoff vote against Bolsonaro to "extra time" in a soccer game. "I want to win every election in the first round. But it isn't always possible," he said.

Bolsonaro told reporters in the capital Brasilia that he understood there was "a desire for change" among the population. The country has been experiencing an economic crisis and high inflation. But he said making particular changes in the current environment "can be for the worse."

Bolsonaro, who has repeatedly questioned the dependability of the country's electronic voting machines, did not challenge Sunday night's results. He noted that his Liberal Party's good showing in Congress could add to his support going into the October 30 runoff.

Bolsonaro's right-wing allies won 19 of the 27 seats up for election in the Senate. Early results also suggested a strong showing for his supporters in the lower house. "I plan to make the right political alliances to win this election," he told reporters.

Da Silva left the presidency 12 years ago with a record popularity rating. But he is now disliked by many Brazilians after he was found guilty of accepting bribes and jailed during the last election. His guilty verdict was later overturned by the Supreme Court, permitting him to run again this year.

Bolsonaro was a career lawmaker who rode a wave of opposition against Lula's Workers Party to win the presidency in 2018. He united different branches of Brazil's right, including Christian groups, farming interests and pro-gun supporters.

Bolsonaro's administration has been marked by divisive speech and critics have questioned his commitment to democratic values. He has also been widely criticized for his handling of the COVID-19 pandemic and has served during the worst deforestation in the Amazon rainforest in 15 years.

round – n. a group of events that is part of a series

challenge – v. to express disagreement with ideas, rules, or the authority of something

bribe – n. money or gifts given to someone in exchange for favored treatment

commitment – n. a promise or firm decision to do something