Update Required To play the media you will need to either update your browser to a recent version or update your Flash plugin.
By John Russell
18 October 2021


Brazilian artist Mundano has used the remains of burned trees from the Amazon rainforest to create a huge painting in Sao Paulo.

The mural painting on the side of a building shows a firefighter standing among fallen trees, fires and dead animals.

"I'm using evidence of the crime," said Mundano. He calls the 1,000-square-metre artwork an act of "artivism". The word artivism suggests a link between art and activism. 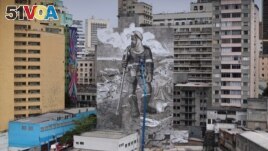 Brazilian artist and activist Mundano works on the mural 'The Forest Brigade' using paint made with ashes collected and brought from fires in Amazon, Pantanal and other biomes, in Sao Paulo, Brazil October 14, 2021. (REUTERS/Amanda Perobelli)

Mundano travelled more than 10,000 kilometers across Brazil during June and July. He collected the remains of burned trees and plants from the Amazon rainforest, the Pantanal wetland area, the Cerrado tropical savannah and the Atlantic Forest.

He also met with firefighters and volunteers to listen to their stories.

Scientists say the Amazon plays an important part in easing the effects of climate change. Its plant life takes large amounts of carbon dioxide from the air and stores it.

"This mural is a protest, a cry for help," said Mundano. "I support fire brigades and also for this fire culture to stop, it's leading us to self-destruction."

John Russell adapted this story from a Reuters report. Mario Ritter, Jr. was the editor.

savannah – n. a large flat area of land with grass and very few trees especially in Africa and South America

brigade – n. a group of people organized to act together