Who Will Be Brazil's Next President?

Update Required To play the media you will need to either update your browser to a recent version or update your Flash plugin.
By Jonathan Evans
24 October, 2014


Brazilians will choose a president Sunday. Two candidates will be on the ballot -- Dilma Rousseff and Senator Aecio Neves. President Rousseff won the most votes in the first round of voting earlier this month. But she did not win a majority of votes, so a runoff election is required.

Ms. Rousseff received almost 42 percent of the 112 million votes on October 5th. She received a majority of votes in 15 of Brazil's 27 states. Mr. Neves received nearly 34 percent of the votes. He won in 12 states, including Sao Paulo, which has more people than any other state.

Experts say Ms. Rousseff was successful because of the popularity of her political party, called the Partido dos Trabalhadores, or Workers' Party. The country's low-wage workers strongly support her and her party. Many social welfare programs were created during the two terms of Workers' Party president Luiz Inacio Lula da Silva. He is known as "Lula" in Brazil. He was very popular.

Brazil's President Dilma Rousseff shakes hands with Aecio Neves. Rousseff and Neves will face each other in a presidential runoff on Oct. 26. (AP Photo/Andre Penner)

When Ms. Rousseff spoke to her supporters after the announcement of the October 5 election results, she noted the popularity of her political party.

Her opponent is Aecio Neves. He is an economist and a senator. He served two terms as governor of the state of Minas Gerais. Mr. Neves is the candidate of the Partido da Social Democracia Brasileira, or Brazilian Social Democratic Party.

Both the Workers Party and the Brazilian Social Democratic party have competed for many years. But Mr. Neves says he wants to stop the fighting between the two parties.

He said he wants the support of Brazilians who are angry but dream of a better country. He urged Brazilians to believe, as he says he has always believed, that it is possible for the government to be both kind and able to reach its goals. 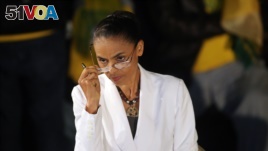 Former environment minister and senator Marina Silva placed third in the first round of elections. She received more than 21 percent of the votes. Ms. Silva became popular in public opinion polls after the death of Governor Eduardo Campos in a plane crash in August. Mr. Campos was the candidate of the Partido Socialista, or Socialist Party. She had belonged to the Worker's Party for 25 years before joining the Socialist Party. But during the campaign the Worker's Party strongly attacked her. Some political observers said it was the most negative campaign in Brazil since the country returned to democracy almost 30 years ago.

Ms. Silva has given her support to Aecio Neves. Her supporters may decide who wins the election.

President Rousseff has many issues to deal with. The Brazilian economy is in poor condition. Some observers say it has entered a recession. Experts say Ms. Rousseff lacks a clear plan to help the country's economy improve. And the government-controlled oil company Petrobras is accused of making billions of dollars in illegal payments. Ms. Rousseff was the head of the company's governing board during the administration of President Lula. She has reportedly said she did not know anything about the payments.

Voting in Brazil is required, or mandatory, for all citizens between the ages of 18 and 70. This includes Brazilians living in other countries, including the United States.

Janete Callahan is a Brazilian citizen living in Washington, DC. She explains the process she and other Brazilians in the area went through to vote in the first round.

Political experts say it is hard to predict which candidate will win the presidential race.

Who do you think will win the election? Leave your prediction in the comments section below.

ballot – n. a ticket or piece of paper used to vote in an election

predict – v. to say that something will or might happen in the future

recession – n. a period of time in which there is a decrease in economic activity and many people do not have jobs

runoff – n. an additional race, contest, or election that is held because an earlier one did not result in a winner

Now it's your turn to use these Words in This Story. In the comments section, write a sentence using one of these words and will provide feedback on your use of vocabulary and grammar.