Update Required To play the media you will need to either update your browser to a recent version or update your Flash plugin.
By Caty Weaver
27 April, 2016


A public opinion study shows six out of 10 Brazilians say a "snap" election could settle the country's political crisis.

The study showed 62 percent of Brazilians want President Dilma Rousseff and Vice President Michel Temer to resign so a new election can be held.

Rousseff is facing an impeachment process at a time when the Brazilian economy is in a recession. The country also has been dealing with a corruption crisis involving Petrobras, the state-operated oil company.
But the Brazilian Congress would have to pass a constitutional amendment to have an early election. The next election is supposed to take place in 2018. 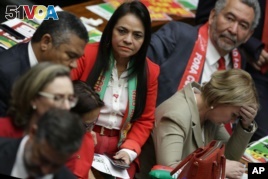 Ruling party lawmakers react after the lower house of Congress voted to impeach Brazil's President Dilma Rousseff in the Chamber of Deputies in Brasilia, Brazil, April 17, 2016.

The study found that only 25 percent of Brazilians want Rousseff to continue as president. Eight percent said a Temer government could fix the crisis.

Researchers carried out the survey between April 14 and 18. They spoke with 2,022 Brazilians in 142 areas.

Researchers asked them about possible future leaders. Almost 40 percent expressed support for environmentalist Marina Silva. Another 32 percent said they liked Aecio Neves as a possible leader. Neves was Rousseff's opponent in the presidential election of 2014.

Opposition to Rousseff has increased in recent months. Some people accuse her of illegally covering up government budget deficits in 2014. She denies the accusations.

Talk about Rousseff's possible impeachment has been a major subject in Brazilian media. The country is trying to recover from its worst recession in many years. In addition, Brazil has been attempting to stop the Zika virus, and prepare for the 2016 Olympic in Rio de Janeiro. The games open in less than four months.

The lower house of Brazil's parliament supported the effort to impeach Rousseff.The Senate is expected to vote on the issue early next month.

The opposition needs only a simple majority to suspend her and open a trial. The process could take as long as six months.

Let us know what you think. Write to us in the Comments Section or on 51VOA.COM.

snap - adj. done or made suddenly or without careful thought