Brazilians Vote for Next President on Sunday

Update Required To play the media you will need to either update your browser to a recent version or update your Flash plugin.
By Jonathan Evans
05 October, 2018

A total of 13 candidates are on the ballot.

The leading candidate is said to be 63-year-old Jair Bolsonaro of the Social Liberal Party. He is supported by 35 percent of likely voters in the latest opinion survey.

During the election campaign, Bolsonaro has said that, if elected, he will help Brazil deal with a number of problems. He has promised to take steps to reduce crime, strengthen the economy and fight corruption.

But many Brazilians are concerned about some of the statements Bolsonaro has made in the past. Some believe many of his ideas are racist, homophobic and unfair to women.

Bolsonaro's supporters say tens of millions of Brazilians hope he will be elected, even if they will not say so to friends or family members.

Last month, Lula told supporters, "I want everyone who would vote for me to vote for Fernando Haddad for president of Brazil. From now on, he will be Lula for millions of Brazilians."

Haddad and Lula are said to be friends and similar in their political positions. But for many voters in Brazil, the two men are also very different.

Lula served as the country's president between 2003 and 2011. Haddad was mayor of Sao Paolo for four years, from 2013 to 2017. Before becoming a candidate for mayor in 2012, Haddad served as Brazil's education minister under Lula and then former president Dilma Rousseff.

American Mark Jones has been watching the election campaign. Jones is head of the Latin American Studies program at Rice University in Houston, Texas. He says a Bolsonaro victory would represent a move away from traditional party candidates in Brazil.

Jones told VOA, "In a country that's hungry for someone who's a non-traditional politician...he's providing the vehicle for them to cast their vote."

Jones added that the Workers' Party is being blamed for the country's recession, high crime rate and political corruption. He says that has helped Bolsonaro's rise in popularity. 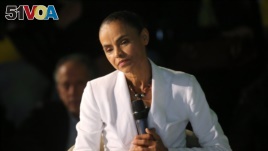 Another candidate is Marina Silva of the Sustainability Network Party. Silva was born in a rubber-producing community in the Amazon rainforest. She served as Brazil's environmental minister while Lula was president. She was a candidate in the past two presidential elections.

Since early 2014, Brazilian police and government lawyers have launched a major anti-corruption operation. Their efforts have led to discovery of political wrongdoing in every major party, except Silva's.

If no candidate wins a majority of the votes on Sunday, an election with only the top two candidates will be held October 28.

Victor Beattie reported this story for VOA News. Jonathan Evans adapted his report for Learning English with additional information from the Associated Press and Reuters. George Grow was the editor.

homophobic – adj. of or relating to a fear or opposition to sexual activity between persons of the same sex

sustainability – adj. involving a method of harvesting so that the Earth is not permanently damaged

network – n. a system or organization