Update Required To play the media you will need to either update your browser to a recent version or update your Flash plugin.
By VOA
27 October, 2014


Brazil's President Dilma Rousseff has been re-elected to a second term. She won less than 52 percent of the votes.

Her Workers' Party has held the presidency since 2003. The party is credited with expanding social welfare programs and lifting millions of people out of poverty.

But the election was close because Brazil has experienced weak economic growth.

US ambassador calls for more international effort to stop Ebola

The United States ambassador to the United Nations is calling for a stronger international effort to stop the spread of the Ebola virus.

The disease has killed almost 5,000 people in West Africa this year.

Ambassador Samantha Power was in Guinea on Sunday. She will also travel to Sierra Leone and Liberia.

Separately, the governor of New York amended his state's policy on health care workers who return to the United States after treating Ebola patients in Africa. 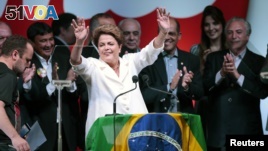 Brazil's President Dilma Rousseff reacts during news conference to the election results, in Brasilia Oct. 26, 2014. (REUTERS/Ueslei Marcelino)
Governor Andrew Cuomo said that workers who show no signs of the virus would be permitted to stay in their homes for a 21-day period. He also said they would be examined two times a day by other health care workers during that time.

South Korean government lawyers have rested their case in the trial of the captain of the Sewol ferry. More than 300 people were killed when the boat sank six months ago.

The lawyers say they will seek the death sentence for captain Lee Joon-seok. They plan to ask for lesser sentences for the other 11 crew members.

The captain and 14 crew members were among the first people to leave the sinking ferry.

A 14-year old girl has died after being shot at a high school in the U.S. state of Washington. Hospital officials say Gia Soriano died late Sunday, two days after the shooting. She is the second student to have died in the shooting.

She and four other students were shot at the school, about 55 kilometers north of the city of Seattle. Two boys and a girl are still in the hospital.

The boy who shot them was a student at the school. He shot and killed himself after the shooting. News reports say the two wounded boys are members of his family.