Update Required To play the media you will need to either update your browser to a recent version or update your Flash plugin.
By Hai Do
16 March, 2016

Brazil newspapers said the protests were the largest political demonstrations in the country's history. The protest took place in 200 cities and towns.

The protesters asked lawmakers to impeach the unpopular president. Rousseff's political party faces a corruption scandal while the country is in its worst recession in 25 years. 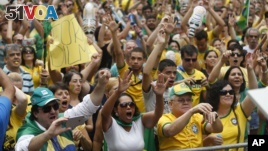 Sergio Praca is a political analyst at the Getulio Vargas Foundation in Rio de Janeiro. He said the nationwide protests "were very powerful" and were "the worst scenario possible for the government."

Officials are investigating Rousseff and her Workers' Party for their role in the corruption scandal at state oil company, Petrobras.

Prosecutors said more than $2 billion was paid in bribes and other funds by construction and engineering firms in exchange for inflated Petrobras contracts.

Dozens of former Petrobras executives and political figures, including Rousseff's mentor, former president Luiz Inacio Lula da Silva, are under investigation. Some of the alleged corruption took place while Rousseff was chairman of the Petrobras board.

Rousseff, whose term ends in 2018, said she will not quit. But the president and her Workers' Party are facing a new threat.

On Saturday, Rousseff's main governing partner, the Brazilian Democratic Movement Party, said it is reviewing its alliance with the Workers' Party.

Hai Do adapted this story from VOA News with additional materials from Reuters and the Associated Press. Kathleen Struck was the editor.

impeach - v. to charge a public official with a crime while in office

role - n. a part that someone or something has in an activity or situation

bribe - n. when something of value is given in order to get someone to do something

mentor - n. someone who teaches or gives advice to a less experienced and often younger person