Update Required To play the media you will need to either update your browser to a recent version or update your Flash plugin.
By Anna Matteo
08 December, 2018

On this program we explore words and expressions in American English.

Today, we take another trip to the exciting world of live theater. For many performers -- dancers, singers and actors -- appearing on Broadway is a dream come true!

Broadway is one of New York City's first roads and longest. It is also one of the most famous!

Broadway's Theater District is between 42nd and 53rd Streets in downtown Manhattan. This part of Broadway is the heart of American theater.

Broadway was also one of the first streets in New York City to get electric lights. That is why some people call it the "Great White Way."

They say the neon lights on Broadway.

They say there's always magic in the air.

At night, the lights of Broadway seemed to shine brighter than the stars in the sky. And then there are the stars of Broadway's stages.

To make it on Broadway you have to be very good. But you also have to be tough. Performing, in general, comes with a lot of rejection. Actors usually have many doors closed in their faces before other doors, hopefully, open.

But even if you are hard-working and gifted, you may also need something else to succeed on Broadway – luck! 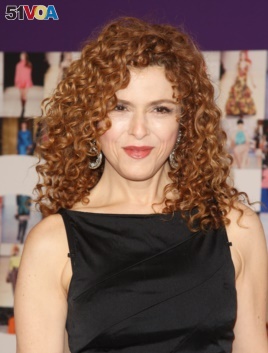 Bernadette Peters is one of the most well-known Broadway actors. Her career has spanned five decades. And she has been nominated for seven Tony Awards.

Maybe that is why theater people are so superstitious. They have customs or behaviors that many non-theater people may find strange.

Take for example, the expression "to break a leg." This may sound violent. But it is not. We often say this to wish people good luck.

In the theater, you should never wish an actor "good luck." That is considered to be unlucky. (I told you. They have strange customs.)

Instead, you should say to them, "Break a leg!"

But why? It hardly seems like a nice thing to wish on anyone.

Well, there are several explanations.

One comes from the wings, or the side areas of a stage in a theater. In the wings, you will find what is called a "leg line." If an actor passes this line, people in the audience are able to see them. So, this line helps an actor waiting in the wings stay hidden from the audience before going on stage.

However, it was a good thing, and even lucky, to cross or break the leg line. This meant they were supposed to be on stage and performing. So, an actor who broke the leg line would get paid -- a very good thing, indeed!

Another explanation comes from the superstitious nature of theater people.

To keep bad luck out of a performance, they may try to trick the gods or universe or whatever. They do this by saying something bad -- in this case, "break a leg."

We may not know exactly how this wish of good luck got started. But we do know that it is much better to tell an actor to "break a leg" -- instead of "good luck."

It may come from the theater, but you can say it to anyone who needs a little luck. You can tell a friend "break a leg" before they give a speech at a wedding or a big presentation at work.

Well, you can say this to almost anyone. I would not say "break a leg" to a dancer or an athlete. They may take it the wrong way.

And that's the end of Words and Their Stories. I'm Anna Matteo.

How do you tell people "good luck" in your language? Do you say something different to actors on the stage? Let us know in the Comments Section!

Anna Matteo wrote this story for VOA Learning English. George Grow was the editor. George Benson sings "On Broadway" earlier in the story and Ella Fitzgerald sings "Lullaby of Broadway" at the end.

superstition – n. a belief or way of behaving that is based on fear of the unknown and faith in magic or luck : a belief that certain events or things will bring good or bad luck : superstitious – adj. of, relating to, or influenced by superstition