Update Required To play the media you will need to either update your browser to a recent version or update your Flash plugin.
By Susan Shand
07 December 2021


As the number of English learners in American schools continues to rise, it is not just students that are going to need more help.

Parents and families that do not speak English also need support, say school officials. Parents need to feel like they can be actively involved in their child's schooling, regardless of any language barriers. 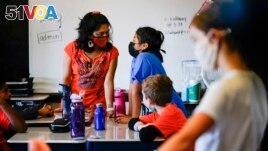 And it is "on us as a district to create that space" for families to be involved, said Leonor Vargas. She is an administrator with the Austin Independent School District in Texas, where almost 30 percent of the student population are English learners.

She and Principal Janet Huger-Johnson of the East New York Elementary School of Excellence shared their experiences last week in an online discussion with the news organization EducationWeek.

It is important for parents and families to be able to communicate in their desired language. Johnson said her school, for example, uses a phone app that permits teachers and administrators to send messages in English that will translate to the parent's language. And when the parent responds, the message is translated back into English. She added that sometimes the school will need to hire people in the community to help with translation.

Beyond language barriers, parents and family members should feel like they are part of the school community, the officials said. That means getting to know every family through online or in-person meetings and creating space for parents from similar backgrounds to communicate with each other about their concerns. Vargas said just asking parents simple questions like what their child's dreams are, or what their child is good at, will quickly start a conversation.

Vargas shared a story from her district where some Afghan students were not eating food provided by the school. After speaking with the families, the teachers found the students were not eating because they were unfamiliar with the food. So, Vargas and other school teachers will soon hold an event where families can taste the food and know what their children are eating. Schools will also start sending home translated menus.

Schools can "find value in education through their culture," Johnson said.

Parents that do not speak English need to feel that they are equal to any other parent in the school community, they said. And if schools do not offer support to families, the results can cause problems.

A recent investigation by The Associated Press found that schools in the city of Philadelphia often provide little support to immigrant parents. Some parents said the school system offered poor translation services.

Mandy is a parent in Philadelphia who speaks Mandarin. Her child has special needs. She told the AP that during one meeting, a telephone translator said she did not know anything about special education and refused to translate. Recently, she had to bring a friend to the school to translate during a school meeting.

"It feels like immigrant parents are deliberately excluded and pushed to the margins," Mandy said.

Students in English education programs are a large and growing population in American schools. The U.S. Department of Education says that the number of English learners increased by more than 1 million from 2000 to 2020. Forty-three states saw increases in English learners over that time.

And U.S. Census data showed that the number of people who speak languages other than English at home increased by more than 8 million over the last 10 years. Almost 22 percent of American households speak a foreign language at home.

The Department of Education Office of Civil Rights requires schools to provide translation services to families in whatever language they speak. Schools must not use other students to translate or use other untrained workers.

In Philadelphia, however, the AP found that schools often use students for translation.

Olivia Ponce, another parent in Philadelphia, also had problems with language. She tried to talk to a school official when her daughter was being bullied at school. The school's translator was not available, so the official had another Spanish-speaking student translate. The student did not translate well, and the discussion went poorly. Ponce kept her daughter home for a week.

"I didn't know we had rights and that they couldn't take students out of class to help translate for us...They never told us this," Ponce told the AP. "What I want is for parents to know that when their children start an education, they have a right to be a part of it."

Dan Novak wrote this story with additional reporting from The Associated Press. Susan Shand was the editor.

principal — n. the person in charge of a public school

menu — n. a list of the foods that may be ordered at a restaurant

deliberate — adj. to think about or discuss something very carefully in order to make a decision

exclude — v. to prevent someone from doing something or being a part of a group

marginalize — v. to put or keep someone in a powerless or unimportant position within a society or group