Update Required To play the media you will need to either update your browser to a recent version or update your Flash plugin.
By Jessica Berman
28 November, 2016

Researches have reported a breakthrough in the search for a treatment for Zika virus. To better understand this report, you will need to know the following words: antibody, vaccine and immune system.

Researchers have discovered an antibody that greatly reduces infection with Zika. This antibody could possibly be made into a vaccine to protect people against the virus.

Researchers named the antibody ZIKV-117. An antibody is an immune system protein.

Researchers got the antibody from a Zika patient. Then they tested the antibody in pregnant mice infected with Zika.

ZIKV-117 protected the fetus against infection. The antibody creates a strong reaction to the virus in the immune system. In fact, ZIKV-117 neutralized, or made harmless, each kind of Zika that the scientists tested. The antibody also greatly decreased the amount of virus in the pregnant mice. And, the researchers found decreased levels of the virus in fetal tissue, including brain tissue.

Zika-infected male mice with the antibody were more likely to survive than those without. Some of the mice did not receive the antibody until five days after being infected with Zika. The antibody was still effective, suggesting that it can treat an active infection.

Researchers at Washington University School of Medicine in Missouri and Vanderbilt University in Tennessee did the study. They reported their findings in the publication Nature.

Diamond was a lead investigator of the research.

"(Be)fore this study, there had been no vaccine or any other study that had done anything in pregnant animals to show that anything could abort or prevent disease. So, one thing this does is suggest that antibodies are able to do it and this actually bodes well for future vaccine efforts."

Diamond says scientists could develop ZIKV-117 into a drug that could be used different ways.

Diamond says researchers are now preparing to test the antibody in monkeys. This process, he says, could take six to nine months. If those experiments are successful, human testing could begin soon after that.

Zika can cause severe problems in newborns. The most worrisome is microcephaly. Microcephaly causes babies to be born with very small heads and brains. 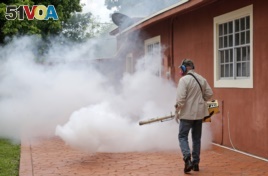 Zika, which is carried by mosquitoes, is currently spreading through the Americas.

Jessica Berman wrote this story for VOA News in Washington. Anna Matteo adapted it for Learning English. Caty Weaver was the editor.

breakthrough – n. a sudden increase in knowledge, understanding, etc. : an important discovery that happens after trying for a long time to understand or explain something

antibody – n. medical : a substance produced by the body to fight disease

immune system – n. medical : the system that protects your body from diseases and infections

abort – v. to stop something before it is completed because of problems or danger : to stop in the early stages <abort a disease>

actually – adv. in act or in fact

bode – v. to indicate by signs

stage – n. a period or step in a process, activity, or development