Brewer, Baker Combine to Use Extra Beer in Germany

Update Required To play the media you will need to either update your browser to a recent version or update your Flash plugin.
By Dan Friedell
27 March 2021


A German beer maker that usually sells a lot of its alcoholic drink had a problem.

In the western city of Dusseldorf, many bars and restaurants are at least partly closed because of COVID-19 restrictions. The rules have been in place since November 2020.

As a result, not as many people are buying beer.

So the beer maker, Fuechschen Brewery, had 6,000 liters of its product that were about to go bad. Instead of throwing the beer away, the brewery asked some bread bakers for help. Many bakers already use grain left over from the brewing process in their bread.

Fuechschen Brewery's Altbier is now an important ingredient in a special bread called "treberbrot." About 12 bakers in the area are now making loaves of "treberbrot," which means used-grain bread.

Peter Koenig's family has run the brewery since 1908.

"It would have been such a shame to just toss out such a tasty beer," he said.

The bakers use the beer instead of water in their recipe.

"I think it's great that these two craft industries have come together like this," Koenig said. 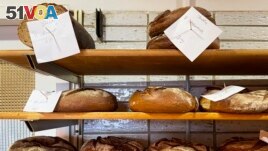 Bread that was baked with beer is displayed at the Coelven bakery in Duesseldorf, Germany. (AP Photo/Daniel Niemann)

Around Dusseldorf, people can buy a loaf of the special bread for less than five dollars. Each purchase comes with a bottle of beer.

Janika Derksen's family runs Coelven Bakery. She said the brown bread tastes very good with a hard outside "and a soft middle."

People from other parts of Germany are calling to find out if the bakery can send them loaves of the bread. Derksen said she would be happy to do that.

Michael Maassen came to the bakery to buy some bread recently. He said he heard about the solution to the extra beer problem.

He said he hoped the bread tastes like the beer.

"It's a great campaign, solidarity with one another is more important now than it ever has been," he said.

Daniel Niemann wrote this story for the Associated Press. Dan Friedell adapted it for Learning English. Mario Ritter, Jr. was the editor.

Would you like to try some of this special bread? Tell us in the Comments Section and visit 51VOA.COM.

ingredient –n. one of the things that are used to make a food, product, etc.

loaf/loaves –n. an amount of bread that has been baked in a long, round, or square shape

shame –n. something that is regretted

toss –v. to throw (something) with a quick, light motion

craft –adj. a job or activity that requires special skill

solidarity –n. a feeling of unity between people who have the same interests, goals, etc.