Update Required To play the media you will need to either update your browser to a recent version or update your Flash plugin.
By Hai Do
04 February 2022


Britain will mark the 70th anniversary of Queen Elizabeth II's rule on Sunday.

The 25-year-old Elizabeth became queen on February 6, 1952, following the death of her father King George VI. She took over a country that survived the damages of World War II with Winston Churchill as prime minister.

Since then, prime ministers, popes, and presidents have come and gone. The Soviet Union has collapsed, and Britain's own empire has disappeared. 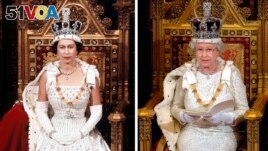 Coronation in the age of television

On June 2, 1953, Elizabeth's coronation was the first event seen on live television by millions around the world.

The broadcast brought the British royal family into people's living rooms. Elizabeth then made her first televised Christmas broadcast in 1957, saying she hoped the new medium would make her message "more personal and direct."

"At least for a few minutes, I welcome you to the peace of my own home," she said at the time.

From weddings to funerals, the ceremonies became must-see television. An estimated 750 million people around the world watched the wedding between Prince Charles and Lady Diana on July 29, 1981.

A Spaniard reportedly told King Charles I that "the sun never sets" on the British Empire. Historians estimated the empire once ruled more than 400 million people and had 25 percent of the earth's landmass. It was so huge that there was always daylight in one of the territories.

Under Elizabeth, Ghana became the first British colony in Africa to celebrate independence in 1957. Three years later, then British Prime Minister Harold Macmillan made his famous "winds of change" speech in South Africa. By 1970, most of Britain's African and Caribbean colonies had gained independence. And Britain handed over Hong Kong to China in 1997.

The queen, however, remains the head of state in 15 Commonwealth countries including Australia, New Zealand and Canada.

Elizabeth's rule has often been compared, good or bad, to the "Golden Age" of the first Elizabeth in the 16th century. That was a time when England grew its economy, expanded its influence, and celebrated the great William Shakespeare.

British historian David Starkey observed that there would be no second Elizabethan age. He said the queen views her role as simply doing a job.

He told Reuters, "I say this not as criticism, but simply as a statement of fact... For she came to the throne with one thought only: to keep the royal show on the road."

Anna Whitelock is Professor of the History of Monarchy at London's City University. She noted, "The definition of success for any monarch over time is to preserve the monarchy and ensure the succession. That is the primary job, and that's what she's done."

Matthew Dennison recently wrote a book about the queen. He said the way Elizabeth performed her role has given her a moral position beyond anything she had as a monarch.

Constitutionally, the British monarch now has few practical powers and is expected to be non-political.

However, historians say Elizabeth has used "soft" power and made the monarchy a unifying force for the nation. At the start of the COVID-19 pandemic, the queen used her broadcast to calm the public.

Former British leaders have said her years of experience have proved of great help. They said they could speak freely without fear of their conversations ever being made public.

Former prime minister Tony Blair said: "She will assess situations and difficulties and can describe them without ever ... giving any clue as to political preference or anything like that. It's quite remarkable to see."

Some historians say the queen will be viewed as the last of her kind, a monarch who commands unquestioned respect.

And Whitelock observed that "She [the queen] will be up there as one of the greatest monarchs not just for her longevity, but for the period of change which she has witnessed."

Hai Do adapted this story for Learning English based on reporting from The Associated Press and Reuters.

coronation – n. a ceremony in which a crowd is placed on the queen or king

empire – n. a group of countries controlled by one ruler

throne -n. spacial chair for the king or queen

monarch - n. a person, king or queen, who rules a country

preserve – v. to keep something in its original state

ensure – v. to make sure, certain

assess – v. to make a judgement

clue – n. something that helps to understand