Britain Moves to Ease Tensions after Attack on London Muslims

Update Required To play the media you will need to either update your browser to a recent version or update your Flash plugin.
By George Grow
19 June, 2017


UPDATE: British media have identified the suspect as 47-year-old Darren Osborne. He is from Cardiff, Wales.

British officials and Islamic leaders acted quickly to ease concerns among Muslims after an attack on a mosque early Monday.

A man drove his vehicle into a crowd near the Finsbury Park Mosque in North London early in the morning. At least 10 people were injured.

The mayor of London, Sadiq Khan, called the incident "a truly horrific terrorist attack on our city." British Prime Minister Theresa May called it, "an attack on Muslims near their place of worship."

Police are treating the incident as a terror attack. The incident outside the religious center follows three attacks inspired by Islamic extremists over the past three months. The violence has fueled a rise in hate crimes across Britain.

The Metropolitan Police Service announced on Monday it was deploying extra officers on the streets of London to protect the public.

May announced that police will examine the security of mosques and provide any help needed before celebrations marking the end of Ramadan, Islam's holy month.

The attack happened early Monday when a speeding van hit people who were giving medical care to a man near the mosque. That man later died.

A crowd of people gathered around the driver. Witnesses said the crowd began attacking him.

A local religious leader, Mohammed Mahmoud, and a few men protected the suspect until police could take him away.

"By God's grace," he said, "we were able to protect him from harm." 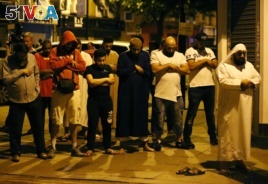 Men pray after a vehicle collided with pedestrians near a mosque in the Finsbury Park neighborhood of North London, Britain June 19, 2017. REUTERS/Neil Hall

Deputy Assistant Commissioner Neil Basu praised the actions of those who detained him.

"What it proves to me is that Londoners will act together to protect themselves, but they will do so in a way that doesn't feed into terrorists' and extremists' hands," Basu said.

Harun Khan, secretary general of the Muslim Council of Britain, said that based on reports from witnesses, the driver was "motivated by Islamophobia."

"Given we are approaching the end of the month of Ramadan and the celebration of Eid with many Muslims going to local mosques, we expect the authorities to increase security outside mosques as a matter of urgency," Khan said in a statement.

But he said there was no need for the community to be frightened because police and government officials have been "very, very supportive."

Britain, especially London, has been "on edge" over several recent incidents, including the terror bombing in Manchester and the vehicle attack and stabbings on London Bridge.

The police service is investigating these attacks and a deadly fire last week at an apartment building. At least 79 people are reported to have died in the fire.

London's mayor called the fire a "preventable accident." He has faced anger over the incident and questions about why the fire caused so much damage. The fire added to tensions in Britain's capital.

Chris Hannas reported this story for VOANews. George Grow adapted his report for Learning English. His story also has information came the Associated Press. Mario Ritter was the editor.

inspire - v. to influence or guide; to affect

approach – v. to come near to; to move near to something

matter – n. a subject or substance

on edge – expression nervous or worried