Update Required To play the media you will need to either update your browser to a recent version or update your Flash plugin.
By Mario Ritter
29 March, 2017


British Prime Minister Teresa May has officially started the process for Britain to leave the European Union (EU).

May sent a letter to European Council President Donald Tusk on Wednesday. The move put Article 50 of the Treaty of Lisbon into effect.

The treaty is an international agreement on which the EU is based. Article 50 deals with how a member country can withdraw from the organization.

May's letter noted the historic nationwide vote on EU membership last year. It said the British people had not voted to "harm the European Union or any of the remaining member states."

The letter went on to say that Britain wanted the EU to succeed and explained that the election result was an effort to "restore national self-determination."

By informing the EU of its decision, Britain now starts two years of negotiations between the two sides. Talks on security, business, defense, health, the environment and other issues are expected to be complex.

The process started on June 23, 2016, when Britons decided in a close referendum vote to leave the EU.

Then-prime minister David Cameron had promised to hold the referendum, but had campaigned for Britain to stay an EU member. Cameron resigned after the vote.

Some observers say the vote's outcome resulted partly from feelings that the EU government was taking too much control away from British citizens.

People in London and Scotland voted to stay in the EU, while other areas supported a British exit, commonly called "Brexit."

Little agreement on how long Brexit will take

Few Britons and political observers agree on what Brexit will mean for Britain and its partners.

Jo Murkens of the London School of Economics says most people do agree the process will be disorderly and take more than two years.

He said, "The effect of European Union law is all pervasive from constitutional-level questions to the regulation of bananas and cucumbers. So, it is a mammoth task that will not be negotiated within two years. It will take a decade or decades to give full effect to EU withdrawal." 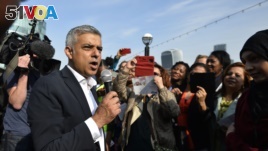 One day before May invoked Article 50, London's Mayor Sadiq Khan called on European leaders not to punish Britain. He said that London would remain an important city, especially as a financial center, after Brexit.

He said, "The truth is that London will always remain a key partner for Brussels and every European nation long after Brexit is resolved."

Khan warned against a bad Brexit deal. He said such an agreement would cut off the EU from its only truly international financial center and risk losing financial services companies to New York, Singapore and Hong Kong.

London's mayor also said the "perfect gesture of goodwill" would be for the government to guarantee that EU citizens would remain in Britain.

Seliq Khan is the first Muslim mayor of a major western city. He has launched a campaign bringing attention to how London continues to welcome foreigners and businesses.

Luis Ramirez reported this story for VOA News. Mario Ritter adapted it for Learning English. George Grow was the editor.

referendum – n. when the people of a country or state vote on a particular law or issue

pervasive – adj. existing in every part of something

gesture – n. something said or done that shows a feeling or attitude

exit – n. the act of going away or leaving; a way out

determination – n. the act of deciding something firmly