Update Required To play the media you will need to either update your browser to a recent version or update your Flash plugin.
By Dan Friedell
03 June 2022


A famous cheese-rolling race that takes place on a steep hill in England returns on Sunday, after a two-year delay caused by the coronavirus pandemic.

The event is held in the town of Brockworth. It was first recorded in 1826. It involves competitors chasing a four-kilogram round of Double Gloucester cheese down a 200-meter hill.

The rolling cheese reaches speeds of 100 kilometers per hour. The first person to make it down the hill is the winner. Most of the cheese chasers fly head over heels down the hill. 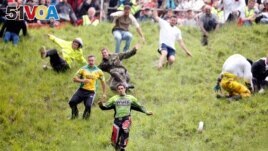 Members of the local rugby team wait at the bottom as "catchers" to help slow people down. Emergency medical workers are nearby in case of serious injuries. Some people say the event is too dangerous because of the number of injuries people receive.

The event is now famous as an "extreme sport." It has been broadcast on television around the world. Thousands of people who want to watch make the trip to Brockworth, which is about 160 kilometers west of London.

Max McDougall lives nearby. He was the winner in 2019. He was not able to defend his championship the following year because of the pandemic.

This year, there are three men's races, a women's race, and a safe children's race, which is an uphill run.

At the end, the winner gets to eat the special prize: a huge piece of cheese.

steep – adj. something, such as a hill, or a road, that is almost straight up and down, or rising very sharply

head over heels – phrase. a term used to describe something that is very hard, but in this case a complete rotation of the body; sometimes used about falling in love