Update Required To play the media you will need to either update your browser to a recent version or update your Flash plugin.
By Susan Shand
08 April, 2019


As Britain tries to withdraw from the European Union, the move is presenting complex problems for some in the financial industry.

Computer trading systems in the international currency markets are struggling to make sense of all the hourly information. This overload, some say, is making it more costly and risky to trade the British currency, the pound.

Prime Minister Theresa May has failed three times to get a deal approved by the British parliament to leave the EU. 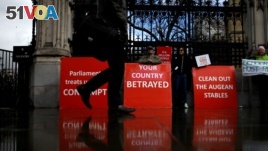 FILE - A person walks past pro-Brexit protesters outside the Houses of Parliament, April 4, 2019.

No one knows when, how or if Britain will truly complete "Brexit," the British exit from the group.

Britain's government is divided over the issue, and the number of people who can influence events has grown very large. This has caused problems for computers with "reading algorithms," or algos. These algos are designed to consider the most recent words of important people before making investment decisions.

Usually computers evaluate people's words by simply deciding how important they are, or how many times they have been spoken. Neil Jones is the head of currency sales at Mizuho, a Japanese bank in London. Brexit has so many people making important decisions and then talking about them that the computers are unable to keep up, he said.

News reading algos are a part of a revolution in investment banking and money management. Machines have replaced the humans who once decided what to buy and what to sell. Costs are lower and decisions are made more quickly by the computers.

At first, reading algos evaluated economic information or central bank policy. But they have grown more intelligent. For example, they can evaluate information that comes from Twitter in a matter of seconds and decide whether or not to invest in a currency.

The problem for the computers is that Brexit is simply creating too much information. Reuters has published up to 400 news stories on Brexit each day in recent weeks. Before Brexit, there were about 15 British political stories.

Bloomberg, another news group, has published up to 1000 stories a day, their spokesman said.

All of this proves that computers, which are logical, may never understand human beings, especially when they are foolish.

currency – n. the money that a country uses

algorithm – n. a set of steps that are followed to solve a mathematical problem or complete a computer process

evaluate – v. to judge the value or condition of something carefully or thoughtfully

logical –adj. of or relating to the formal processes used in thinking and