Update Required To play the media you will need to either update your browser to a recent version or update your Flash plugin.
By Hai Do
20 October 2022

Truss was brought down by economic policy that shook financial markets and divided her Conservative Party.

A party leadership election will be completed within the next week to replace Truss. She will be the shortest-serving prime minister in Britain's history. The earlier record-holder, George Canning, died in office after 119 days in 1827. 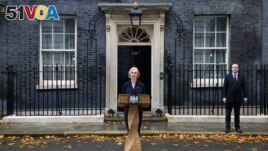 Truss said, "I cannot deliver the mandate on which I was elected." She said, "I have therefore spoken to His Majesty the King to notify him that I am resigning as leader of the Conservative Party."

Conservative lawmakers have increasingly called on Truss to step down after she was forced to drop most of her economic policy. The program announced on September 23 sent the British pound lower, creating disorder in the financial markets.

"It's time for the prime minister to go," said lawmaker Miriam Cates. Another, Steve Double, said of Truss: "She isn't up to the job, sadly." And legislator Ruth Edwards said, "it is not responsible for the party to allow her to remain in power."

Just a day earlier Truss had promised to stay in power, saying she was "a fighter and not a quitter." Truss apologized and admitted she had made mistakes during her six weeks in office. But she said that by changing the program she had "taken responsibility and made the right decisions in the interest of the country's economic stability."

But Truss could not hold on after a senior minister quit her government and a vote in the House of Commons turned chaotic.

Truss was elected leader of the Conservatives and became Prime Minister following the resignation of Boris Johnson. Party lawmakers said her most likely replacement could be former finance minister Rishi Sunak, or Penny Mordaunt, who came third in the race to become the next prime minister six weeks ago.

A national election does not have to be held until 2024. But opposition leader Keir Starmer of the Labor Party said, "Britain cannot afford the chaos of the Conservatives anymore. We need a general election now."

mandate –n. the power to act that voters give to elected leaders

allow –v. to permit something to happen

chaotic –adj. in a state of complete disorder