Update Required To play the media you will need to either update your browser to a recent version or update your Flash plugin.
By Hai Do
08 December 2020

"I feel so privileged to be the first person vaccinated against COVID-19," said Keenan, who turns 91 next week. "It's the best early birthday present I could wish for because it means I can finally look forward to spending time with my family and friends in the New Year after being on my own for most of the year."

Prime Minister Boris Johnson called the first injection "a shot in the arm for an entire nation" as British officials prepared to vaccinate 400,000 more people.

American drug-maker Pfizer and Germany's BioNTech developed the vaccine. Britain is first providing the vaccine to healthcare workers and people over age 80 in hospitals or under other immediate medical treatment.

Last week, Britain became the first country to approve the vaccine for emergency use. 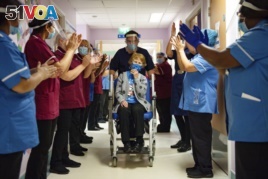 Margaret Keenan, 90, is applauded by staff as she returns to her ward after becoming the first patient in the UK to receive the Pfizer-BioNTech COVID-19 vaccine, at University Hospital, Coventry, England.

In the U.S., the Food and Drug Administration (FDA) released a document Tuesday confirming that the Pfizer-BioNTech vaccine was strongly effective against COVID-19.

The FDA released the documents as it prepares to rule on Pfizer's emergency use request of the vaccine this Thursday.

Pfizer and BioNTech reported that its treatment appeared to be 95 percent effective against COVID-19 in a large study of 44,000 volunteers. They said only eight volunteers who had received the two-shot treatment were among the 170 confirmed cases of COVID-19.

The FDA report says the Pfizer-BioNTech vaccine was 52 percent effective against COVID-19 after one shot. The efficacy rate rose to 95 percent after volunteers were given the second shot three weeks later.

The agency added that the test vaccinations raised "no specific safety concerns" linked to age, race, ethnicity, weight or medical conditions of recipients. Many volunteers in the study reported minor side effects, including tiredness and moderate pain, after the shots.

The study, however, did not include people under the age of 16 or pregnant women. It also does not provide an answer on how long the shots would protect people after vaccination.

The FDA's vaccine advisory committee is to meet Thursday for a public discussion of Pfizer's emergency use request. On December 17, the committee plans to examine findings of another COVID-19 vaccine trial from American drug-maker Moderna.

Both vaccines from Pfizer and Moderna are made with a technology called messenger RNA, or mRNA. They do not contain an inactive or weakened virus like traditional vaccines.

To make an mRNA vaccine, scientists create a genetic material that directs the human body to produce antibodies that can recognize and destroy the new coronavirus.

The study said, "(This) will require further research as more data becomes available from the trial."

The Oxford-AstraZeneca vaccine is less costly to produce and easier to transport than the mRNA-based vaccines. Based on agreements with the U.S. government, vaccines from Moderna and Pfizer will cost between $15 and $25 a treatment. Oxford-AstraZeneca's vaccine will cost under four dollars.

On Saturday, Russia began vaccinating thousands of doctors, teachers and others with its Sputnik V vaccine. China has also begun a vaccination campaign. The country is also selling its vaccine to other nations, including Turkey, Brazil and Indonesia.

The Russian and Chinese vaccines did not complete full medical trials that scientists consider necessary for safe and effective use.

Hai Do wrote this story for Learning English with additional information from Reuters. Caty Weaver was the editor.

privileged - adj. having special rights or advantages that most do not have

dose - n. the amount of medicine that is given or taken at one time