Update Required To play the media you will need to either update your browser to a recent version or update your Flash plugin.
By Bryan Lynn
28 November 2021


Some British lawmakers are criticizing a rule that prevents members of parliament from taking young children into the House of Commons.

The House of Commons is Britain's lower house of parliament where legislative debates are held.

Labour Party legislator Stella Creasy recently reported that parliamentary officials had told her she could not bring her 3-month-old son to the House floor.

Creasy said that in the past, she had taken her baby and an older daughter to the House of Commons without any problems. But she received the new order after she took her son to a debate. She was told the rule had changed in September.

Creasy said the rule hurts efforts to make politics more family-friendly. "There are barriers to getting mums involved in politics, and I think that damages our political debate," she told the BBC. 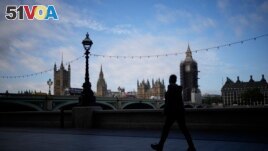 This file photo shows a view of the scaffolded Elizabeth Tower, known as Big Ben, and the Houses of Parliament from the other side of the River Thames, in London, Thursday, on Oct. 14, 2021. (AP Photo/Matt Dunham, File)

Britain's Deputy Prime Minister Dominic Raab, a Conservative Party member, said he has "a lot of sympathy" for Creasy's position. But he said the decision is for House officials to make.

"I think we do need to make sure our profession is brought into the modern world, the 21st century," Raab said. He added that changes can permit parents "to juggle the jobs they do with the family time that they need."

Green Party lawmaker Caroline Lucas called the ban "absurd." She said children were "far less disruptive" than many of the legislators.

House of Commons Speaker Lindsay Hoyle said he had asked parliament's rule makers to reconsider the ban. He said the advice Creasy received represented the current rules. But he noted that there were differing opinions on the issue.

"Rules have to be seen in context and they change with the times," Hoyle said. He added: "It is extremely important that parents of babies and young children are able to participate fully in the work of this House."

accompany – v. to go somewhere with someone

sympathy – n. the feeling that you understand and care about someone else's situation

juggle – v. try to do several things at once

disrupt – v. to interrupt something and stop it from continuing

participate – v. to take part in something