Update Required To play the media you will need to either update your browser to a recent version or update your Flash plugin.
By Caty Weaver
06 April 2020


British Prime Minister Boris Johnson is in intensive care at a London hospital 11 days after announcing he had COVID-19.

On Monday evening, the prime minister's office released a statement. It read, "Over the course of this afternoon, the condition of the Prime Minister has worsened and, on the advice of his medical team, he has been moved to the Intensive Care Unit at the hospital." 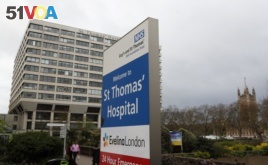 A view of St Thomas' Hospital in London where Britain's Prime Minister Boris Johnson has been placed in intensive care for treatment of COVID-19. (AP Photo/Frank Augstein)

The statement said Johnson was awake and does not require a ventilator, or breathing machine, at this point. It said Johnson has asked Foreign Secretary Dominic Raab to deputize for him.

Hours earlier, Johnson posted on the social media site Twitter. He wrote that he was in good spirits after spending a night in the hospital. He also thanked the National Health Service for taking care of him and others in this difficult time.

The 55-year-old leader had been quarantined in his Downing Street home since he was found to have COVID-19 on March 26. He is the first known head of government to be sickened with the virus.

He continued to preside at daily meetings on the outbreak until Sunday. He also released several video messages during his quarantine. Raab led the meeting Monday.

Speaking at the government's daily coronavirus press briefing, Raab said Johnson was being "regularly updated," but said he had not spoken to the prime minister since Saturday.

"He's in charge, but he'll continue to take doctors' advice on what to do next," Raab said.

The government said Monday that 51,608 people had been confirmed to have the coronavirus in Britain, and that 5,373 of them have died.

The Associated Press reported this story. Caty Weaver adapted it for VOA Learning English. Hai Do was the editor.

routine -adj. done or happening as a normal part of a job, situation, or process

deputize -v. to give (someone) the power to do something in place of another person : to make (someone) a deputy — often followed by to + verb