Update Required To play the media you will need to either update your browser to a recent version or update your Flash plugin.
By Caty Weaver
18 February 2022


A new show at the British Museum in London explores the mystery of Stonehenge, the famous ancient circle of stones in southern England.

The huge stones are believed to have been put in place between 5,000 and 3,500 years ago. The purpose of the circle is still debated. Was Stonehenge meant as a sun dial, a burial ground, a memorial or something else? 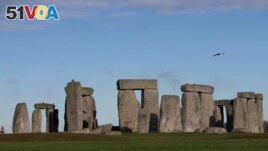 In this Tuesday, Dec. 17, 2013 file photo, visitors take photographs of the world heritage site of Stonehenge, in Wiltshire England.

The World of Stonehenge exhibition brings together more than 430 objects from across Europe to explore the monument's creators and their world. It was a time of radical change that saw technological developments, major migrations and social change.

The people who built the first part of Stonehenge — with stones moved 250 kilometers from Wales — were followed by Bronze Age farmers, traders and warriors who were connected to continental Europe.

At first, Stonehenge was a cemetery. It holds the burned remains of up to 200 men, women and children.

Wilkin said, "People often ask, is it like the Pyramids? But there's no pharaoh in the middle of this monument."

Later, the first bluestones were placed in a ring of 4-meter-tall standing stones with lintels across their tops. Much of that structure still stands. Wilkin said the monument became a place for honoring ancestors and for ceremonies.

One of the very first objects visitors to the show see is an ancient cup shaped to look like Stonehenge.

There are many other interesting images in the exhibition, from a wall covered in Neolithic stone cutting tools to finely made gold hats and jewelry.

Stonehenge was not the only circular "henge" monument built in ancient Britain. The British Museum show also looks at Seahenge, a circle of wood posts put up 4,000 years ago. The structure was uncovered by the waves on an English beach in 1998.

Like Stonehenge, it is believed to have been lined up with the sun, which was central to the lives and beliefs of these ancient people. Experts say Stonehenge is lined up with sunrise and sunset, respectively, at the summer and winter solstices. Those are the days with the most and the least daylight of the year.

The show's starring piece is a 3,600-year-old Nebra Sky Disc, a bronze circle with gold signs representing the sun, moon and stars. It is believed to be the oldest surviving map of the sky. The disc was found in 1999 in eastern Germany, but the gold comes from Cornwall in southwest England.

"There is a really large amount of mobility and migration at this time." Wilkin said.

In time, that mobility pushed out the Stone Age culture that built Stonehenge. Metalworking immigrants from Europe brought social and technological change.

Metal meant people could carry important symbols with them, lessening the need for stone monuments like Stonehenge. Wilkin said the show aims to demonstrate the human side of the change from the Neolithic era to the Bronze Age.

"We've known about that as a technological change," he said. "But what we've been able to do in the show, I think, is to show that it had a big impact on people's beliefs, and how they saw their identities."

curator –n. a person who is in charge of a museum or a similar organization

worship –v. to show respect and love for God or for a god especially by praying, having religious services

cemetery –n. a place where dead people are buried

lintel –n. a piece of wood or stone that lies across the top of a door or window and holds the weight of the structure above it

souvenir –n. something that is kept as a reminder of a place you have visited, an event you have been to

mobility –n. the ability to move or in place or in society

impact –n. influence; the ability to affect something