Update Required To play the media you will need to either update your browser to a recent version or update your Flash plugin.
By Bryan Lynn
25 October 2022


Rishi Sunak became Britain's third prime minister this year on Tuesday. The former Treasury chief promised to lead the country through an economic crisis and rebuild trust in politics.

Sunak made the traditional visit to Buckingham Palace and met with King Charles III, who officially asked the prime minister to form a government. He leads the country's Conservative party.

The 42-year-old Sunak comes from an Indian and Hindu background. The former hedge fund chief first entered elected politics seven years ago. A hedge fund is a group of investors who use complex investments to gain high returns. 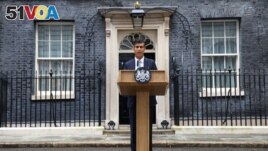 Sunak is the youngest British leader to be elected in more than 200 years. He replaces Liz Truss, who recently resigned after spending just 44 days in office. Truss faced a wave of criticism over a series of economic proposals that shook financial markets and divided her Conservative party.

Political experts say Sunak is seen by his party as a safe caretaker who can hopefully steady an economy moving toward recession.

Speaking outside the prime minister's residence at 10 Downing Street in London, Sunak said he realized the great difficulties currently facing Britain. "I fully appreciate how hard things are," he said. He added that he also recognized that he will have to work hard to regain the public's trust. "All I can say is that I am not daunted."

Sunak said he would look for the best ways to cut public spending and fix the "mistakes" made by Truss.

The new prime minister is expected to cut government spending to reduce an estimated $45 billion budget deficit. The deficit was created by an economic slowdown, higher borrowing costs and energy support measures. Solving the problem "will mean difficult decisions to come," Sunak said.

As chief of Britain's Treasury, Sunak became popular with the public by offering billions in support to closed businesses and unemployed workers during the COVID-19 pandemic.

Now, he will have to oversee tax increases and spending cuts as he tries to bring inflation and government debt under control. Workers in the railroad, telecommunications, waste collection and other industries have gone on strike for higher wages recently.

Sunak also promised to put the public's needs before politics.

Members of Britain's Indian community and people in India celebrated Sunak's new position. Social media and Indian media were flooded with congratulations for Sunak. New Delhi businessman Manoj Garg told The Associated Press, "It is a moment of pride for India that the country which ruled us for many years has now a prime minister of Indian heritage."

Sunak's grandparents came from Punjab state before India and Pakistan were divided after British rule ended in 1947. The family moved to East Africa in the late 1930s before settling in Britain in the 1960s. Sunak was born in 1980 in Southampton, on England's south coast.

Sunak is married to Akshata Murty. Her father is Indian billionaire N.R. Narayana Murthy, creator of the technology company Infosys.

appreciate – v. to understand how good something or someone is

pride – n. a feeling that you respect yourself and deserve to be respected by other people

heritage – n. something possessed as a result of one natural situation or birth