Update Required To play the media you will need to either update your browser to a recent version or update your Flash plugin.
By Bryan Lynn
07 July 2022

A series of political scandals led to Johnson losing the support of numerous government ministers and members of his Conservative Party.

Johnson said he will remain in office until his replacement is found. But his resignation as leader of the Conservative Party is immediate. 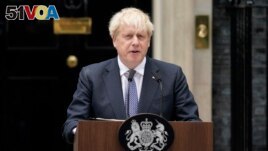 "Today I have appointed a cabinet to serve, as I will, until a new leader is in place," Johnson said. "I know that there will be many people who are relieved and perhaps quite a few who will also be disappointed.

Johnson added: "I want you to know how sad I am to be giving up the best job in the world. But them's the breaks."

The 58-year-old Johnson came to power almost three years ago. At the time, he promised voters he would effectively guide Britain through its withdrawal from the European Union, a process known as "Brexit." Britain voted to leave the EU in a special election in 2016.

The Conservative Party will now have to elect a new leader in a process that could take weeks or months. Among the possible candidates to succeed him are former Health Secretary Sajid Javid, former Treasury chief Rishi Sunak, Foreign Secretary Liz Truss and Defense Secretary Ben Wallace.

In recent days, about 50 cabinet secretaries, ministers and lower-level officials resigned from their positions. Some spoke out in public about the prime minister's lack of integrity.

Johnson had remained in power as he defended himself against a series of political accusations. He had been accused of being too close to party donors and of protecting supporters from bullying and corruption complaints. He also faced accusations that he misled parliament about government office parties that violated COVID-19 restrictions.

Most recently, it became public that Johnson knew about reports of sexual wrongdoing by a Conservative lawmaker before he appointed him to a high position in government.

After the latest scandal, Johnson held on to power for days. He told lawmakers on Wednesday that he had a "mandate" from voters and planned to get on with the business of governing.

But he was forced to accept defeat Thursday morning after one of his closest allies, newly appointed Treasury chief Nadhim Zahawi, publicly told him to resign for the good of the country.

relieved – adj. feeling happy because something unpleasant did not happen or you are not worried about something anymore

disappoint – v. to make someone feel unhappy because someone or something was not as good as they had expected

integrity – n. honesty and the ability to do or know what is morally right

bully – v. to purposely frighten someone who is smaller or weaker than you

complaint – n. a statement that something is wrong or not satisfactory

mandate – n. support for action given to someone by the people voting or them