Update Required To play the media you will need to either update your browser to a recent version or update your Flash plugin.
By Bryan Lynn
09 June, 2017


British Prime Minister Theresa May says she will stay in office although her party lost its parliamentary majority in elections. The voting was held Thursday.

May said Friday she will attempt to form a minority government with Northern Ireland's Democratic Unionist Party, or DUP. DUP leader Arlene Foster confirmed plans to hold talks with the Conservatives to discuss a way "to bring stability to our nation at this time of great challenge."

May's Conservative Party won the most seats overall in the House of Commons, but fell well short of a majority.

May called for the election last April, saying she hoped to expand her parliamentary majority. She said it would help her in negotiating Britain's exit from the European Union. 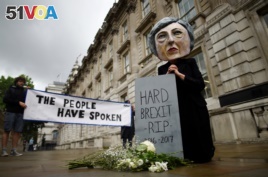 A protester wearing a Theresa May mask is seen the day after Britain's election in London, June 9, 2017.

At the time, she was considered a strong favorite against Labour Party leader Jeremy Corbyn. But Corbyn's party won many new seats Thursday.

May has said she favors a "hard" Brexit. This would mean Britain's immediate and total withdrawal from the single market. The country would also gain full control over its borders. And, it would permit Britain to make its own trade deals and control the making of laws and enforcement in its territory.

Corbyn's Labour Party officially backs Brexit. However, many top party officials have called for a "softer" process. A "soft" Brexit would remove Britain as a member of the EU, but permit it to remain in the single market.

After the voting, Corbyn called on May to resign. He said voters had rejected her Brexit plan. "We are ready to do everything we can to put our program into operation," he said.

Jack Straw, a former Labour foreign minister, said the result means there will now be a lot of pressure in parliament for a soft Brexit. "The math and chemistry in the Commons will be pushing away from a hard Brexit," he said.

Leading Brexit campaigner Nigel Farage said the result had put the whole future of Brexit at risk. "If the Brexit Secretary is considering putting the single market back on the table then the whole process is now seriously damaged," he tweeted.

On Friday, European officials and lawmakers commented on the apparent political uncertainty in Britain. They said it could harm the Brexit talks, which are to begin in 10 days.

After a meeting with Britain’s Queen Elizabeth, May promised to keep pushing forward to “fulfill the promise of Brexit.”

National security was also a major issue of the election campaign following recent and deadly terror attacks in the country. Other issues included the future of the government-run National Health Service, immigration and the economy.

The Scottish National Party, or SNP, also suffered major election losses. The party has called for a second vote on whether Scotland should separate from the United Kingdom. Political observers said the latest losses mean a vote about independence is unlikely in the near future.

Bryan Lynn wrote this story for VOA Learning English, based on reports from VOA News, the Associated Press and Reuters. Caty Weaver was the editor.

exit – n. the act of going out or away from something

uncertainty – adj. in doubt, not known

fulfill – v. complete what is expected or required to do