Update Required To play the media you will need to either update your browser to a recent version or update your Flash plugin.
By Alice Bryant
31 January 2021


A historic shoe company in Britain is feeling financial pressure because of Britain's withdrawal from the European Union.

One hundred ninety-two-year-old Tricker's makes costly shoes and boots that can sell for more than $600. The company has sold products to everyone from Prince Charles to shoe fans in Japan. But, the company director, Martin Mason, worries about the new price of doing business with the EU. 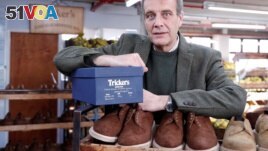 Costs from companies that ship Tricker's products to buyers in the EU are growing. These extra costs could reach more than $135,000 a year for the company.

The trade deal reached in December of last year between Britain and the EU avoided costly tariffs. But Tricker's is finding that paying the EU's value-added tax (VAT) has become a lot more complex for direct sales to shoe buyers.

British exporters must now use different tax rates for the European Union's 27 member states. Tricker's has permitted shipping companies to collect the tax. Now, the shippers are seeking extra payments for each package sent to the EU from the shoe factory in Northampton.

It is a problem for companies on both sides of the border. The process is also causing delays in the arrival of goods. Shipments that used to take one day to arrive are now taking three or four. Also, when the shippers make mistakes, it causes more delays and paperwork.

Prime Minister Boris Johnson has said the recent problems with trade are small and to be expected under a new system. Johnson points to the possibility for export growth if Britain gets trade deals with the United States, India and other countries.

Prices up, profits down

Adding to Tricker's problems are VAT costs from shipping companies for shoes returned to its base in Northampton. Some wholesalers, businesses that sell to other businesses, are sending the shoes back. So are EU customers in need of shoe repairs.

The expected Brexit-related costs of about $136,690 a year would be equal to almost 10 percent of Tricker's online sales. This in turn represents about 15 percent of total profit at Tricker's, Mason said.

Brexit refers to Britain officially ending its EU membership, a move that took place one year ago.

The new taxes have led the company to raise prices for EU customers and pay the rest of the costs from its profits. "I think all companies here in the UK are getting extra costs as a result of the deal," Mason said.

Mason spoke to Reuters news agency from an empty shop floor in the factory. Normally, 86 employees would produce 1,000 pairs of shoes a week.

Last year, during the first stay-at-home orders, was the first time they had ever been closed, he said. "We've been through...world wars, financial crises, stock market crashes," said Mason.

"Even during the world wars, we were open, making boots for the army," he said. Dealing with Brexit and the coronavirus combined has made things much harder. "We will get through it. It will be tough," he said.

British government budget experts say the country's economy could be about four percent smaller under Brexit in 15 years' time. However, Mason said Brexit has led to a few good possibilities for his company, which exports about 85 percent of its shoes.

An agreement with Japan would be a help and an agreement with the United States might lower import tariffs. Japanese customers make up more than 30 percent of Tricker's business. About 15 percent comes from the EU.

But for now, Mason's immediate need is to deal with the VAT issues. He said he hopes that common sense wins and that the problems of getting products into Europe will be solved.

"It is a bit of a barrier to recovery" after COVID, he said. "But... if wise heads get together and solve some of these issues, then hopefully it will become easier."

ship –v. to send a product to a buyer or customer

tariff –n. a tax on imports or exports by a government

value-added tax (VAT) –n. a tax that is collected whenever a product or service is sold including among suppliers or wherever "value" is added

package –n. a container holding some good, product or object that is sent somewhere

customer –n. someone who buys a good or service from a business