British Woman in Prison for Taking Her Baby to Raqqa

Update Required To play the media you will need to either update your browser to a recent version or update your Flash plugin.
By Kathleen Struck
02 February, 2016


A British woman who took her child to Syria and joined the Islamic State has been sentenced to six years in prison.

A British court ruled Tareena Shakil guilty of membership in the Islamic State terror group. It also convicted her of encouraging acts of terrorism.

In October 2014, she and her 1-year-old son flew to Turkey. She told her family she was going on a beach vacation. She crossed the border into Syria and went to Raqqa, a city that IS controls. 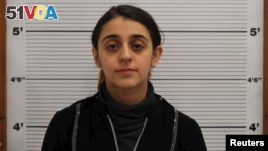 Tareena Shakil is seen after her arrest, in this undated booking picture courtesy of West Midlands Police.

Three months later, she fled the terror group. She turned herself in to the Turkish military. She was returned to Britain and arrested at London's Heathrow Airport in February 2015.

Shakil denied that she joined the Islamist group. She said she wanted to live under Islamic law and did not support terrorism.

But prosecutors said photographs on her phone showed her holding weapons. They said the pictures also showed her son wearing a hat with an Islamic State symbol.

Judge Melbourne Inman sentenced Shakil. He told her, "You were well aware that the future, which you had subjected your son to was very likely to be indoctrination and thereafter life as a terrorist fighter.''

VOANews.com reported this story. Kathleen Struck adapted it for Learning English. Caty Weaver was the editor.

encouraging – v. to give someone support