Britney Spears Wins Court Battle to Hire Her Own Lawyer

Update Required To play the media you will need to either update your browser to a recent version or update your Flash plugin.
By Caty Weaver
16 July 2021


Pop music star Britney Spears won court permission Wednesday to employ a lawyer of her choosing to represent her interests.

The decision came in a court hearing in Los Angeles, California.

Spears is under the care of a legal guardian agreement known, in the state of California, as a conservatorship. In some states, it is called a guardianship.

A court can appoint conservators for people judged to be too unwell to care for themselves. The health problems can be mental or physical. Conservators have wide power to make financial and other decisions for the person they care for.

Britney Spears was placed in a conservatorship in 2008 with her father Jamie Spears as head. For most of the years since, few details of the situation were made public. But recently Spears began seeking changes to the conservatorship, including the removal her father as its leader. 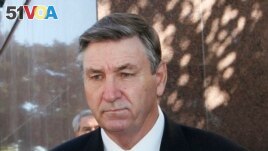 "The question remains, why is he involved," Rosengart said outside the courthouse.

Britney Spears took part in the hearing by phone. She told the judge she had had several talks with Rosengart and wanted his representation. She then spoke directly to the court.

"My dad needs to be removed today," she said. Spears added that she would like to see him legally charged with abuse of his position. She cried as she spoke about the conservatorship, which she described as cruel.

The pop star spoke so fast that at times it was difficult for the court reporter to record her statement.

Spears said she wanted the conservatorship to end immediately, but not if it would force her to undergo more medical evaluations. She described the tests as "stupid." She added that she did not want to provide the chance for, in her words, "people to question my intelligence for the millionth time."

Spears said the conservatorship would deny her requests for things as basic as coffee, her driver's document and hair care products.

She said, "I thought they were trying to kill me" in the early years of the conservatorship as she was being overworked and examined all the time.

She began to cry as she talked about taking comfort in a therapy dog when she felt her family had left her.

Vivian Thoreen is the lawyer for Jamie Spears. Thoreen told the court that Jamie Spears would not resign from his position as conservator. She said Jamie Spears had always put his daughter's best interests first.

Thoreen said Britney Spears had many incorrect beliefs. One of those beliefs was that "her father is responsible for all the bad things that have happened to her."

Thoreen also said that for almost two years Spears has had control only over his daughter's money. The lawyer said Jamie Spears surrendered control over the singer's life choices to a court-appointed professional, Jodi Montgomery.

Thoreen argued that an evidentiary hearing was necessary to investigate the claims that Britney Spears made at another hearing held in June. Spears told that court she was being forced to take medications and use an invasive birth control device.

Thoreen said she found it strange that Britney Spears would make such claims and yet approve of Montgomery as a guardian.

Montgomery's lawyer, Lauriann Wright, also spoke to the court. She said Britney Spears should not have to face additional court examination connected to her recent, emotional testimony.

"I don't think it's a secret that we're dealing with someone with mental illness," Wright said.

Wright also said Britney Spears' medical team had strongly advised that her father "needs to be off the conservatorship."

Supporters of the movement #FreeBritney waited outside the courthouse during the hearing. They cheered when told of the judge's decision. When Rosengart walked out of the building, they cheered again.

In court, he questioned whether the conservatorship should ever have been established.

"This is not working," Rosengart said. "We know that."

Judge Penny said the court would hold another hearing in late September. She expressed hope that the opposing sides will find common ground for Britney Spears' good.

"Everybody should be working collaboratively," the judge said. "It's not about anybody else, it's about her."

The Associated Press reported this story. Caty Weaver adapted it for VOA Learning English. Mario Ritter, Jr. was the editor.

hire –v. employ; to give a job to someone

prosecutor –n. a lawyer who accuses a defendant of a crime in a court of law

evaluation –n. to judge the value or condition of someone in a careful and thoughtful way

comfort –n. a state of feeling less worried or upset after a time of trouble or pain

therapy –n. the treatment of physical or mental sickness

testimony –n. something that a person says in a court of law often while promising to tell the truth

collaboratively –adv. involving two or more people or groups working together toward a goal; cooperation