A Snapshot of Picture Taking in the 1950s; The Music of Photography

Update Required To play the media you will need to either update your browser to a recent version or update your Flash plugin.
By Steve Ember and Caty Weaver
26 July, 2012

I'm June Simms. This week on our show, we talk about photography.
Long before cell phone cameras there was the Brownie Hawkeye. We tell you all about it. And then we listen to some songs that, one way or another, all have something to do with cameras. 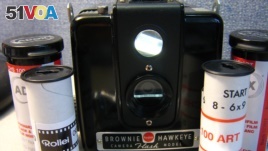 JUNE SIMMS: Have you wondered, as you take a picture with your camera phone and e-mail it to a friend, what "point and shoot" photography was like years ago? VOA's Steve Ember started taking pictures when his parents gave him a very special birthday present. He takes us on a trip back in time...for a "snapshot" of picture-taking in the nineteen-fifties.

STEVE EMBER: It was called a Brownie Hawkeye. It was manufactured by Kodak, from nineteen forty-nine to nineteen sixty-one, and millions came to photography looking down into its viewfinder and taking pictures of Mom and Dad, the family cat, the new car, birthday parties, senior proms, vacations -- everything we wanted to remember, and preserve. They all became – as the Hawkeye's manufacturer would later say in its advertising – "Kodak Moments."

The Brownie Hawkeye – we called it a box camera, long before "point and shoot" entered the language. It was very "fifties" in appearance...and very, very popular. It was made of a heavy black plastic called Bakelite, with bright metal trim surrounding the lens and viewfinder. It was simple in design, sturdily built, and remarkably reliable. Kodak made them for about a decade, from nineteen forty-nine to nineteen sixty-one, and you can still find working examples, some fifty to sixty years later.

While the term "point-and-shoot" had not yet been invented, the Brownie Hawkeye was what I guess we'd now call a "point and shoot" camera. And that really did describe its operation. You'd point it...gently press the shutter release...and the picture was taken. If you were shooting inside, or after dark, you'd pop a big number twenty-five flashbulb into the flash attachment with the large shiny reflector that you'd plug into the left side of the camera. And you'd be very careful not to burn your fingers when you changed flashbulbs for the next shot.

So, there it was. No zoom, no auto-focus. No screen on the back to tell you you'd gotten it right. Just point...and shoot.

Oh yes, you did have to remember to do one other thing – wind the film to the next frame.

And how did you "share" your images back then?

RANDY SMITH: "I'm fifty-five years old, and I still remember going to the drugstore with my parents...and you'd get this little yellow book and you'd open up your photos and we'd just all sit around and look at the twelve shots that we got and we waited a week to get. And I still have boxes and boxes of those old little photo booklets [from] when I was a kid, and the memories are amazing."

That's Randy Smith of Hawkeyemods.com. He has been re-conditioning and modifying fifty and sixty year old Brownie Hawkeye cameras, for a quite wide age range of buyers, including people who came to photography in the digital era...and those of us who never completely abandoned film. Even those, like myself, who might wish to make a sentimental journey back to their true photographic "roots" and work with a different photographic style.

RANDY SMITH:"Hawkeye Brownies just had the old glass lens without any modern day coatings on them, and you'd just get a very nice contrasty old-fashioned look to your image."

Well, I was sold. I just ordered one of Randy Smith's modified Brownie Hawkeyes – with a tripod socket on the bottom – so I could really go back to basics and see about doing some serious photography with nineteen-fifties "point-and-shoot" technology. Might be fun.

RANDY SMITH: "Film will last forever, if you take care of the film and catalog it and put it away, and fifty years from now, somebody'll find your negatives and print them out, and it will just be a treasure that they feel they've just found."

And who knows, maybe I'll just get something for the ages on film with my "new" nineteen-fifties Brownie Hawkeye. We'll post some of my results right here on our web site.

JUNE SIMMS: Songwriters often use cameras and photographs as a theme. The songs are often about memory, past glory or longing. Faith Lapidus and I play some of these songs and explore the language used in them.

FAITH LAPIDUS: That is "Centerfold" by the J. Geils Band. The song came out in nineteen eighty-one on the group's album "Freeze Frame."

"Centerfold" tells about a man who remembers his high school love as perfect. He says "she was pure like snowflakes."

Years later, he sees her picture in a magazine centerfold. It is the kind of magazine that contains pictures of women wearing few or no clothes. The centerfold is a photograph that covers three pages and unfolds from the magazine. It is a big picture and the person in it is the star of the magazine.

JUNE SIMMS: The J. Geils Band sings my blood runs cold / my memories have just been sold / my angel is the centerfold.

When someone says their "blood runs cold" it means they are shocked or scared. The man in the song is shocked.
(MUSIC)

FAITH LAPIDUS: The J. Geils Band song "Freeze Frame" is filled with puns and other word play linked to photography. It talks about a snap shot image, proof sheet love and lots of uses of the word flash.

The idea in "Freeze Frame" is that a photographer has fallen in love with an image captured on film. The song goes zoom lens feelings just won't disappear / her close-up dark room sweet-talk in my ear / her hot-spot love for me is so strong, this freeze frame moment can't be wrong.

JUNE SIMMS: "Freeze Frame" like "Centerfold" is a lively and humorous song. But photos can also be a dark theme in songs. 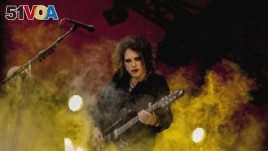 The Cure performing in Denmark earlier this month
??The Cure's "Pictures of You" is an example. The song is about memory, loss and grief.

FAITH LAPIDUS: Photo booths are found in shopping malls, beach boardwalks, amusement parks and other places. The small four-sided structure holds a camera and printer behind glass. There is a small area inside the booth usually with a place to sit. For a small amount of money people can have several pictures taken of themselves.

Deathcab for Cutie sings about a photo booth and the evidence it provides that love once existed. 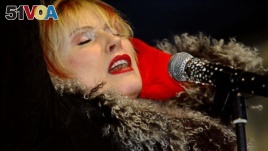 Deborah Harry, of Blondie, during a free concert in New York in 2004
JUNE SIMMS: In nineteen seventy-eight, the band Blondie came out with "Picture This." People say "picture this" to mean "imagine this." Blondie lead singer Deborah Harry describes a photo as "a small remembrance of something more solid."

FAITH LAPIDUS: Kodachrome was a very successful kind of color film made by the company Kodak. It was first produced in the nineteen-thirties.

Musician Paul Simon wrote a song called "Kodachrome." He once said that the song is really about going home, back to one's childhood.

JUNE SIMMS: I'm June Simms. This program was written by Steve Ember and Caty Weaver who also was our producer.