Update Required To play the media you will need to either update your browser to a recent version or update your Flash plugin.
By Andrew Smith
13 December 2022


With a newly shaved head, Jin, the oldest member of the Korean pop group BTS, began his 18 months of required military service on Tuesday.

Jin turned 30 earlier this month. He begins five weeks of basic training at a camp about 45 kilometers from the border with North Korea. The training includes gun shooting, grenade throwing, and marching.

A group of 20 to 30 fans, some holding Jin's photos, and reporters gathered in the cold, snowy weather to see Jin enter the camp. A security force of about 300 police, military, and fire officials was there to provide security. 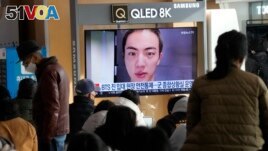 A TV screen shows an image of BTS's member Jin with a shaved head, at the Seoul Railway Station in Seoul, South Korea, Monday, Dec. 12, 2022. South Korean media report that Jin is enlisting in the military service on Tuesday. (AP Photo/Ahn Young-joon)

"He is so skinny," said Mandy Lee, a 30-year-old fan from Hong Kong. "I want him to eat more and stay healthy and safe."

The BTS official Twitter account later posted images showing Jin with other members, likely at the camp, with a message saying: "Our bro!! Have a safe service!! Love you." One image showed members touching Jin's shaved head.

Under South Korean law, most able-bodied men are required to perform 18 to 21 months of military service. The law exempts athletes, classical and traditional musicians, and dancers who performed well in international competitions. But K-pop stars do not receive exemptions, even if they are famous worldwide.

"Those in the pop culture sector experience [a] little bit of disadvantages and unfairness, compared with those in the pure art sector or athletes," Jung Duk-hyun, a pop culture commentator, said.

Chun In-bum is a retired general who once commanded South Korea's special forces. Chun said the government must stop exemptions. He said the decreasing number of people in the military is "a very serious" problem caused by the country's low birth rate.

BTS was formed in 2013 and has a huge number of supporters around the world who call themselves the "Army". The band has performed in sold-out arenas around the world. Six younger members of BTS are to join the military in the coming years. That could mean that the group activities will likely be limited for a few years.

In August, Defense Minister Lee Jong-sup said BTS members who are serving in the military would likely be permitted to continue practicing. He added they could also join other non-serving BTS members in performances.

Cha Woo-jin, a K-pop commentator, said it is unclear if BTS would enjoy the same popularity after finishing their military requirements in a few years.

Andrew Smith adapted this story for VOA Learning English from reports from the Associated Press and Reuters.

shave -v. to cut hair off or to a level close to the skin

grenade -n. a military, explosive weapon with a delay timer, thrown by hand

exempt -v. to provide an exception or allowance for someone to do something that is is normally not permitted

athlete -n. a person trained in a sporting activity

sector -n. an area or category of activity, such as a business sector, arts sector, and the like