Update Required To play the media you will need to either update your browser to a recent version or update your Flash plugin.
By Alice Bryant
27 June, 2017


What is your first memory of riding a bicycle?

Was it easy, difficult, or somewhere in between?

In the beginning, you may have wondered if you would ever be able to ride a bicycle at all. Then suddenly one day, you could ride without help from anyone.

When you repeat a physical action many times, your brain develops permanent memory for how to do it.

There are many examples, such as walking, swimming, dancing, driving a car, playing a musical instrument and speaking your native language. 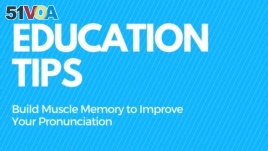 Elizabeth Marner-Brooks says your muscles can help you remember how to pronounce words.

For nearly 30 years, she has taught English language classes at The New School and other universities in New York City. Pronunciation is one of her areas of expertise.

At the start of her pronunciation courses, Marner-Brooks asks her students how often they practice their pronunciation skills. The usual answer is "once or twice a week." Then, she asks how long they think it would take a baby to learn to walk if they only tried that often. She hopes this discussion helps them see the connection between speaking and the memory we build into our muscles.

"It's using the muscles. You have to give yourself permission because human nature dictates that we're going to be spurred on to doing things once we find results. But, we get the results by doing it. And, you can get results very quickly - very quickly - if you just do it."

Right now, the muscles in your mouth, lips and tongue may feel strange as they try to make the shapes to produce the sounds of English words. This can require a lot of effort.

But, Marner-Brooks notes that the muscles will soon remember how to produce the correct sounds with little or no effort.

She works with her students to make consonant and vowel sounds. She also teaches them the use of stress and pitch, two other important elements of English pronunciation.

Many English learners have told Marner-Brooks that other teachers only asked them to repeat English words. They did not teach how to produce the sounds.

Unlike many languages, English has 16 different vowel sounds. So building memory for the correct tongue position is especially important, she notes.

For vowels, she explains that the sounds have a natural progression, from the highest position of the tongue to the flattest position.

Try the sounds that Marner-Brooks pronounces to feel it for yourself.

She adds that speaking is a creative action – we are creating sounds as we speak. A common misunderstanding people have about learning language is that it is only an intellectual action.

To help build your muscle memory, Marner-Brooks says you can use pronunciation videos on the Internet. She suggests English learners avoid using the Internet to simply repeat words they hear.

Marner-Brooks suggests students do vowel and consonant pronunciation exercises for 3-5 minutes four times each day. And, use a mirror to observe yourself as you practice the sounds.

If these exercises feel foolish or strange, she has these final thoughts:

"What I suggest is for you to be comfortable, take the risks, and enjoy speaking the language. That's the goal."

pronounce – v. to use the mouth and other organs of speech to say words correctly

spur – v. to motivate someone to do something

consonant – n. a speech sound (such as /p/, /d/, or /s/) that is made by partly or completely stopping the flow of air breathed out from the mouth

vowel – n. a speech sound made with your mouth open and your tongue in the middle of your mouth, not touching one's teeth or lips

stress – n. greater loudness or force given to part of a word when speaking or to a beat in music

pitch – n. the rise and fall of your voice when you speak

camel – n. a large animal of Africa and Asia that has a long neck and one or two large humps on its back