Update Required To play the media you will need to either update your browser to a recent version or update your Flash plugin.
By VOA
14 October 2021

Officials in the city of Kaohsiung said at least 41 people were injured.

The fire started early Thursday morning local time. A statement by the fire department described it as "extremely fierce." Flames and smoke poured from the lower floors as firefighters tried to control the fire.

The number of dead rose during the day as rescue workers searched the building which combined businesses and homes. By late afternoon, officials confirmed 32 people had died, while 14 people, who showed no signs of life, were among 55 taken to the hospital. In Taiwan, official confirmation of a death is made at the hospital.

Firefighters could be seen spraying water into the middle floors of the 13-floor building. One woman, who was not identified, said on Taiwanese television that her 60-to-70 year old parents were still inside as rescue efforts continued. 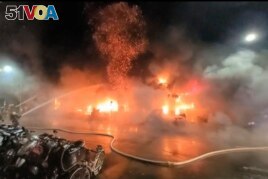 In this image taken from video by Taiwan's EBC, firefighters battle a blaze at a building in Kaohsiung, in southern Taiwan, Oct. 14, 2021.

Many of the people living in the 40-year-old building were retired and lived alone in apartments as small as 13 square meters, local media reported. The building had 120 living spaces on the upper floors. It also had a closed movie theater, disused restaurants and karaoke businesses below them, the Central News Agency said. Mayor Chen Chi-mai said the building was partly abandoned.

The United Daily News, a major newspaper, said fire extinguishers had been put in place last month. But there were only three on each floor because the residents could not pay for more.

The fire appeared to have started on the ground floor.

Investigators were examining a first-floor tea shop whose owner reportedly fought with his girlfriend the day before. They had not ruled out that the fire may have been set on purpose, The United Daily News reported.

Huizhong Wu reported this story for the Associated Press. Mario Ritter Jr. adapted it for VOA Learning English with additional material from Reuters. Susan Shand was the editor.

apartment –n. a room or set of rooms that is part of a building and is used as a place to live which people pay to use but usually do not own

karaoke --–n. a form of entertainment in which a device plays the music of popular songs and people sing the words to the songs they choose

abandoned –adj. not taken care of; no longer used or kept up

fire extinguisher –n. a metal container filled with chemicals that is used to put out a fire

nightclub –n. a business that is open at night, has music, dancing and usually serves alcohol and food