Update Required To play the media you will need to either update your browser to a recent version or update your Flash plugin.
By Dan Friedell
16 October, 2016


In France, a man walks on what can only be described as a human-sized hamster wheel.

The wheel moves around and around, as the man keeps walking. What is he doing?

He is lifting a heavy object to the top of a tower the same way workers moved such objects 800 years ago.

In the 13th century, workers did not have the 100-meter tall cranes they now use to build tall buildings. So they had to be creative and come up with simple machines to get their work done. 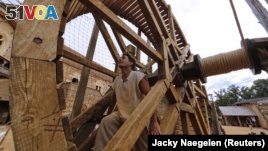 The Guedelon castle is a typical French medieval chateau-fort being built using the techniques, materials and rules of the 13th Century.

The man on the large wheel is walking at a reasonable speed. The wheel turns and pulls a rope connected to a pulley at the top of the tower. Another rope tied to the pulley lifts supplies from the ground.

This is just one way skilled craftsmen are building a 13th-century castle without using modern tools. Crews have been working on the castle since 1997. It is being built in the Burgundy area of central France.

Organizers expect the work to last another 10 to 15 years. That means it will take close to 30 years to finish the project.

The crews are making progress at about half the speed of the workers from 800 years ago. That is because many of them are accustomed to using modern tools. When the crews use heavy chisels and hammers to break rock, as they did hundreds of years ago, they are learning as they go.

The goal of the project is to learn more about old building techniques in case they might be of use today.

Clement Guerard, 44, is a stonemason; he cuts and builds with stone. He has been working on the castle for 17 years.

He said one way he is able to work on something like this for so long is by forgetting "some of the pace of modern life, to be able to adapt to working by hand."

At a given time, about 40 people are working on the project. One of them is Nick Platt, a retiree from Britain. He wants to improve his building skills.

"I don't like using electric tools, except perhaps drills," he said. "So when I came here, I found the use of hand tools was natural. But the saws that we use are very, very different and initially quite cumbersome to use. But now I find they are eminently perfect for the job."

Platt is one of hundreds of people who volunteer their time. Many tourists come to watch the crews at work. Tourist donations fund the project so it can continue.

One visitor, Nathalie Bonis, said the workers have made a lot of progress in 10 years.

"We now understand the time taken to build a castle," she said. "It's extraordinary to see these men from back then who could build such a thing with the strength of their arms and their sweat."

Kevin Enochs wrote this story for VOANews based on a story by Reuters. Dan Friedell adapted his report for Learning English. George Grow was the editor.

What do you think of the castle-building project? We want to know. Write to us in the Comments Section or on 51VOA.COM.

hamster – n. a small animal that is kept in some homes

pulley – n. a wheel or set of wheels that is used with a rope or chain, to lift or lower heavy objects

stonemason – n. a person who cuts, prepares, and builds with stone

heritage – n. traditions or beliefs that are part of the history of a group or nation

pace – n. the speed at which something happens

saw – n. a tool that has a blade with sharp teeth and that is used to cut through wood, metal, and other hard material

cumbersome – adj. hard to deal with because of size or weight

castle – n. a large building usually with high, thick walls and towers that was built in the past to protect against attack