Update Required To play the media you will need to either update your browser to a recent version or update your Flash plugin.
By Hai Do
21 June, 2018

The American fast-food company Burger King has apologized for offering free hamburgers to Russian women if they got pregnant by World Cup soccer players.

Burger King quickly removed the post from its social media sites. But social media users around the world shared images of the announcement. 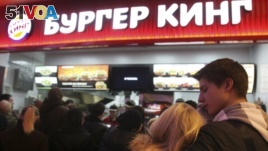 The ad promised free burgers for women who were able to get "the best football genes" and "ensure the success of the Russian team for generations to come."

Burger King's American headquarters said in a statement Wednesday to the Associated Press, "We are sorry about the clearly offensive promotion that the team in Russia launched online." It said the offer did not represent the company's values. It added, "We are taking steps to ensure this type of activity does not happen again."

Advertising in Russia sometimes includes sexist ideas. A female student from Moscow told the USA Today newspaper that Russian women are used to sexist advertising in their country. She said, "Companies know they can appeal to the basic instincts of Russian men in this way. My male friends thought it was funny. We get used to this."

Hai Do adapted this story for Learning English based on AP and other news reports. Ashley Thompson was the editor.

hamburger - n. a sandwich of flat, round cake of finely shopped beef

ensure - v. to make something sure, certain or safe

promotion - n. something such as advertising that is done to make people aware of something and increase its sale or popularity

instinct - n. a way of behaving, thinking, or feeling that is not learned