Burundi Refugees Asked to Fight Their Own People

Update Required To play the media you will need to either update your browser to a recent version or update your Flash plugin.
By Anita Powell
21 December, 2015


Burundi officials say refugees who fled to neighboring Rwanda are being asked now to fight against their homeland.

An adviser to Burundi's president told Voice of America that Burundi has proof that the refugees were recruited into armed groups. Adviser Willy Nyamitwe say some of the recruits are children. 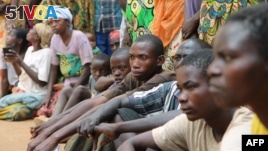 A group of Burundian refugees waits for a soap and blanket distribution at Gashora on Bugesera, Rwanda, April 10, 2015. Some refugee children have allegedly been recruited to fight against Burundi.

Rwandan officials have denied all charges of recruitment and weapons smuggling.

A report from Refugees International, a humanitarian organization that helps refugees, confirmed that armed groups in Rwanda are recruiting Burundians in refugee camps. The report mentioned that close to 80 refugees interviewed said they were asked to fight.

The United Nations refugee agency says more than 93,000 Burundi citizens have fled their homeland since April.

Anita Powell wrote this story for VOANews.com. Jim Dresbach adapted it for Learning English. Kathleen Struck was the editor.

recruited - v. to choose and appoint candidates to join an organization

revealed - v. to make public; to make known to others

interviewed - v. to gather information by asking someone questions

smuggle – v. to move something from one country into another illegally and secretly