Update Required To play the media you will need to either update your browser to a recent version or update your Flash plugin.
By Susan Shand
13 November, 2017


More than 400,000 people have fled Burundi to neighboring African countries because of political unrest and violence.

The refugees have relocated mostly to Rwanda, Uganda and Tanzania.

Burundi and other central African countries have asked the refugees to leave their camps and return home. But Burundian political refugees say it is not safe. 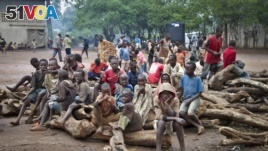 FILE - A group of Burundian refugee children sit on a pile of wood, at the Gashora refugee camp in the Bugesera district of Rwanda, April 21, 2015.

Refugees who spoke to VOA said they fear they will be harmed by the government of Burundi's President Pierre Nkurunziza. In 2015, Nkurunziza began his third term as president although local and international organizations called on him to step down.

Jacqueline Nduwayezu is a former school teacher who lives with her six children in the Mahama refugee camp in eastern Rwanda.

She spoke to a VOA reporter who recently visited the camp. She said, "We are here because there is no security in our country."

Eloge Rugemangabo is the head of the refugee community in Mahama. He said men from the Pro-government Imbonerakure militia beat him because he was a member of the opposition MSD party.

"I was tortured and discriminated against at work. I slept outside for three days for fear of being killed," he said.

He said things must change before refugees will return.

"We left our parents, houses, brothers and sisters," he said. He added that he will return when he is sure conditions are safe.

On a visit to Nakivale refugee camp in Uganda, Burundi's Home Affairs Minister asked Burundian refugees to come back. The country, he said, was ready to welcome back its citizens. He also said many of the refugees are afraid or fled rumors of violence.

President Nkurunziza made the same request on a visit to Tanzania in July.

"Today I want to tell Tanzanians and Burundians that Burundi is now peaceful, and I am inviting all Burundi refugees to return home," he said.

The human rights group released a report in September that said returning refugees are at risk of violence or death from security forces and pro-government militia.

The report also said the Imbonerakure continues to commit human rights crimes against anyone believed to oppose the president's party, the CNDD-FDD.

One man told Amnesty, "If you are not CNDD-FDD, you are considered their enemy."

Amnesty's Burundi researcher, Rachel Nicholson, said in the report that "Burundi has not yet returned to normality." She also said that attempts to deny abuses should not be believed.

The United Nations refugee agency, UNHCR, warns that political and human rights conditions in Burundi continue to cause increasing numbers of refugees to flee to neighboring countries in search of asylum.

Earlier this year, UNHCR and other human rights agencies made an urgent appeal for $429 million to meet the needs of Burundian refugees across the area. But, less than $85 million has been provided.

In camps like Nakivale, refugees live in overcrowded shelters and there is not enough food, water or health services.

Felicien Habumugisha has lived in Nakivale for nearly 10 years, after fleeing an earlier time of difficulties in Burundi.

He explained there was not enough food, no education for the children, no assistance and no chance of leaving.

The 52-year-old said he will not go back to Burundi until it is safe. His parents were killed after being involved in politics, and he was arrested several times before he left.

"The politics of Burundi itself is not stable. We don't feel that Burundi is safe today for us to go back," he told VOA.

Susan Shand adapted this story for Learning English based on a story VOA Story by Edward Rwema. Mario Ritter was the editor.

relocate - v. to move to a new place

abandon - v. to leave and never return to

rumors --n. information passed from person to person that is not proved to be true

overcrowded – adj. filled with too many people