Update Required To play the media you will need to either update your browser to a recent version or update your Flash plugin.
By Hai Do
05 December, 2018


Presidents, a king and queen, a prince, a chancellor and a handyman from Maine joined family and friends to celebrate the life of President George H.W. Bush, Wednesday.

The day began with a 21-gun salute and the song Hail to the Chief as Bush's flag-covered casket came down from the Capitol where he had lain in state. The vehicle carrying his casket passed by the White House where Bush had served the country as its 41st president. 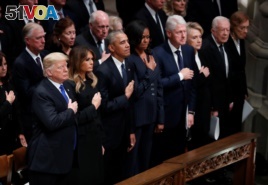 At the National Cathedral in Washington D.C, President Donald Trump sat next to former presidents Barack Obama, Bill Clinton and Jimmy Carter, and their wives. Across the aisle were Bush's son George W. Bush, the country's 43rd president, and the rest of the Bush family.

Presidential historian Jon Meacham called Bush "America's last great soldier-statesman" in the first of four eulogies. Meacham described how Bush was shot down over the Pacific Ocean as a 20-year-old Navy pilot. He reminded others of how the event shaped Bush's mission in life.

Former Canadian Prime Minister Brian Mulroney praised Bush for his work as a leader. He credited Bush for working to end the Cold War, uniting Germany, leading an international coalition to free Kuwait from Iraq and creating the North American Free Trade Agreement. He added, "I believe it will be said that no occupant of the Oval Office was more courageous, more principled and more honorable than George Herbert Walker Bush."

Another family friend, former Senator Alan Simpson, brought laughter to the full cathedral with his story of loyalty and friendship.

George W. Bush remembered his father as "the brightest of a thousand points of light." He said his father was someone who "made his children believe anything was possible." In a lighter moment, Bush said, "To us he was close to perfect, but not totally perfect...The man couldn't stomach vegetables, especially broccoli." The late president was known for his dislike of the vegetable.

The son broke down at the end of his eulogy while talking about the time his parents lost a young daughter. He added, "Dad is hugging Robin and holding Mom's hand again."

The kinder and gentler tone of the state funeral had been set much earlier. The Bush family invited President Donald Trump to attend the event. Trump was not invited to Barbara Bush's funeral in April or the recent funeral of Senator John McCain.

Earlier in the day, the president tweeted, "This is not a funeral, this is a day of celebration for a great man who has led a long and distinguished life. He will be missed!"

Only people with an invitation could attend the funeral in the cathedral. Among them was Mike Lovejoy, a man who has been fixing things at the Bush's summer home in Kennebunkport, Maine for many years.

At the end of the state funeral, Bush's casket returned to Houston to lie in repose at St. Martin's Episcopal Church.

On Thursday, Bush will be buried on the grounds of his presidential library at Texas A&M University. There, he will be buried next to his wife Barbara Bush and his daughter Robin.

Hai Do wrote this story for Learning English. Mario Ritter Jr. was the editor.

handyman –n. a person skilled in doing small jobs often around a house

casket –n. a box used for burial, a coffin

lie in state –v. when the body of an official is placed in a state building for the public to pay their respects

aisle –n. a passage between one group of seats in a church (theater or airplane) and another

eulogy –n. a speech that praises someone who has died

occupant –n. a person who holds a position at a particular time

principled –adj. having strong beliefs about what is right and wrong

distinguished –adj. known by many people because of some quality or achievement

repose –n. to rest or be lain somewhere

library –n. a place where books, magazines, recordings and other media are available for people to use or borrow