Update Required To play the media you will need to either update your browser to a recent version or update your Flash plugin.
By Alice Bryant
30 November, 2016

Moise easily defeated 26 other candidates in the November 20 election.

Haiti's election council announced the unofficial results on Monday. It said he received 55.6 percent of the votes. 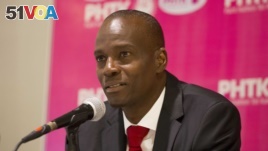 Jovenel Moise, from the PHTK political party, won 55.6 percent of the votes in Haiti's election on November 20.

Just 21 percent of Haitians with a right to vote marked ballots.

The voting took place a year after Haitian officials cancelled the results of the earlier presidential election.

Jovenel Moise was the candidate of the ruling PHTK, the party of former President Michel Martelly.

Moise is a banana exporter and new to politics. He used the nickname "the banana man" during the election campaign to avoid being mistaken for another candidate whose name also included "Moise."

There were 27 presidential candidates in this election. With so many other candidates, it is unusual to reach a 35 percent lead over the second-place candidate.

Moise's lead gave him a clear majority. That means the country will not need a runoff, or follow-up, election.

The second-place finisher, Jude Celestin of the Lapeh party, had 19.5 percent of the vote. The Associated Press reported that he and two other candidates plan to reject the preliminary results and take their case to the electoral court.

Haiti's electoral court confirms the final vote count. The court will announce the winner on December 29. Until then, political parties can dispute the results.

After a long wait for this election, the voting process was relatively problem-free, said Uder Antoine, the director of Haiti's election council.

There were two major delays leading up to the election of Jovenel Moise. The first came in October of 2015, when presidential election results were cancelled because of reported cheating. A commission that examined that election said the main issue was a lack of skill by election workers, not political fraud.

Moise had also received the most votes in the 2015 election.

The second problem was Hurricane Matthew. The storm hit the country in October and caused severe damage to some areas.

Destruction from Hurricane Matthew and an earthquake in 2010 are still barriers to voting for many Haitians who live far from major cities, noted Qatar-based broadcaster Al Jazeera. Another problem was the lack of voting stations in these areas.

Jocelerme Privert, Haiti's current president, was chosen in February to rule temporarily until the new president is confirmed. Privert has remained in power since Martelly's term ended in February 2016.

Haitians are hoping that their new leader will end a year of struggles and insecurity, while uniting the country and creating jobs.

Violent protests affected parliamentary elections earlier last year. Election results were canceled in about a fourth of the voting districts.

This time, more than 13,000 police officers and United Nations peacekeeping troops were on guard to protect voting stations.

Haiti has long been known as the poorest nation in the Americas. Thousands of people who lost their homes in the 2010 earthquake are still living in shelters, and the population of Haiti's tent cities has grown since the hurricane last month.

A cholera epidemic that took place after the earthquake has remained, and the number of infections rose sharply in recent weeks.

Earlier this month, Haiti began a campaign to vaccinate more than 800,000 people against cholera. The disease spreads quickly in places where water supplies are unsafe and clean conditions are lacking.

Cholera had not been a problem in Haiti until it was accidentally brought there by U.N. peacekeepers. The U.N. force was deployed to help with earthquake security and repairs after the quake.

preliminary - adj. coming before the main part of something