But: a Small, Common, and Important Word

Update Required To play the media you will need to either update your browser to a recent version or update your Flash plugin.
By John Russell
02 June 2022


The simple, three-letter word "but" might not sound or look special, interesting or beautiful.

But this little word can be a powerful force in writing and in speaking. It can play an important part in creating colorful, interesting sentences.

In this Everyday Grammar, we will explore how a simple connecting word makes for good storytelling. 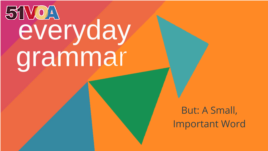 The word "but" has many uses. It can act as a coordinating conjunction, preposition, adverb, and sometimes even a noun – as in the expression ‘No ifs ands or buts about it!'

For today's report, let's explore the part "but" plays as a coordinating conjunction. A conjunction joins two things together.

When acting as a coordinating conjunction, "but" is used to add information to an earlier statement that usually contrasts with it in some way.

We often use "but" to connect two clauses, or groups of words that have a subject and a predicate. Consider these lines from "The Diamond as Big as the Ritz," by F Scott Fitzgerald.

"John strained his eyes to see whether there might be men coming down the mountain, but the mountain was bare of human life."

"John strained his eyes to see whether there might be men coming down the mountain, and he didn't see anyone."

This sentence is much less interesting. Let's explore why.

In the book Storyworthy, the American storyteller Matthew Dicks described a few words that can bring a story to life. One of these words is "but."

Dicks says "but" has an interesting effect on the reader or listener. The words that come before "but" create an expectation. What comes after "but" goes against the expectation. This creates interest between statements and ideas.

Other common conjunctions, such as "and," do not have the same effect, Dicks believes. Speaking or writing that uses "and" too much becomes more like a list – and lists are not very interesting.

Now, it's your turn to do an exercise. Take these two statements and connect them using "but." You can pause the audio after the second statement if you need more time before hearing the answer.

She said she had lost their address long ago.

A few days later it miraculously turned up.

Here is one way to connect the two statements. It comes from the short story, "That in Aleppo Once..." by Vladimir Nabokov:

"She said she had lost their address long ago, but a few days later it miraculously turned up..."

This report is not only about telling stories. It is also about exploring connections between ideas. Such connections are important for expressing more complex language in writing and in speaking.

Remember, like any word or structure, it is good to use "but" in the correct amount. It is like cooking. You need the right amounts of the right ingredients to get a nice finished product. If you add too much of any one thing, the result might not be very good.

The next time you read stories or listen to English speakers, pay careful attention to how they use "but." It's a small, simple word, but it can bring variety and richness to your language.

contrast –v. to compare two things to show their differences

predicate –n. the part of a sentence that expresses what is said about the subject

strain – v. to try very hard to do or get something

bare – adj. not containing anything

variety – n. the quality or state of having or including many different things