Cacao Is More Than Just Chocolate

Update Required To play the media you will need to either update your browser to a recent version or update your Flash plugin.
By Anna Matteo
28 March 2021


Oded Brenner has a great job. He makes chocolate.

In the 1990s, he co-created an international chocolate company called Max Brenner Chocolate. His businesses included a 650-square-meter store on Broadway in New York City.

Then in 2012, Brenner left that business. A few years later, he began exploring a different side of chocolate. In 2015, during a trip to Jamaica, he developed a love and excitement for the fruit that produces chocolate: cacao.

The Jamaican people taught him a lot about cacao -- namely, it is more than just chocolate. Brenner saw Jamaican people making juice, liquor, and flour from the cacao fruit. And they used the whole fruit – not just the beans.

Brenner told the Associated Press that although he had worked with chocolate for 20 years, he knew little about cacao.

"It is the most unknown fruit behind the most known fruit," Brenner said.

While the fruit might have been unknown to him, it is not unknown to the people of Jamaica and other countries like Ecuador.

The Ecuadorian people also taught Brenner how to use cacao. In Ecuador, he saw people drink cacao water and eat the dried fruit of the pods. You can eat the whole fruit, he learned. But in making traditional chocolate, he added, "all of the other parts of the fruit are wasted." 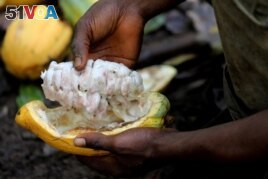 The fruit is a little sweet and a little sour. The cacao water is described as refreshing. The seed inside is the cacao bean. This is the part that is processed to make chocolate.

With his new business and his new knowledge, Brenner said he wants to tell both sides of the chocolate story. So, he has created new products that celebrate the traditional side of chocolate-making and the natural taste of the cacao fruit.

Health experts have long noted the possible good effects that chocolate can have on health. The T.H. Chan Harvard School of Public Health says on its website that the dark chocolate produced from cacao has many necessary nutrients. These include iron, copper, magnesium, zinc, phosphorus, and substances called flavanols.

Brenner said the unsweetened fruit has other nutrients as well. Cacao is high in antioxidants. And the water is full of natural chemicals called electrolytes. These are substances needed in the body's fluids to control important processes including how your body uses vitamins and minerals and removes waste.

In addition to health, Brenner said that the cacao he uses for his products is farmed in a way that is not harmful to the environment. And it is also fair to the farmers.

juice –n. the liquid that can be squeezed out of fruits and vegetables

liquor –n. an alcoholic drink; a product of chocolate processing made from cacao/cocoa beans

flour –n. a fine powder made from grains or similar seeds that is used in cooking

pod –n. a part of some plants that holds seeds

sour –adj. having an acid taste like a lemon

antioxidant –n. a substance that prevents chemical reactions that cause some chemicals in the body or in food to break down