Update Required To play the media you will need to either update your browser to a recent version or update your Flash plugin.
By Jeri Watson
26 October, 2014


People in California are suffering the effects of the state's third year of drought. This water shortage is causing many Californians to urge the state to change its water policy.

The fountains are dry at the J. Paul Getty Museum in Los Angeles. Museum officials turned off the water as part of a statewide campaign to save water. Officials have restricted use of water on grass, trees and other plants. And those who disobey the rules can be punished.

People living in Los Angeles recently heard the head of the local water agency talk about the crisis. His comments about the shortage worried Cherie Shankar. She heard him speak at a meeting held by the group Town Hall Los Angeles.

"We've been doing things a certain way for over 100 years, but everything has changed. We have climate change. We have these unprecedented droughts..." 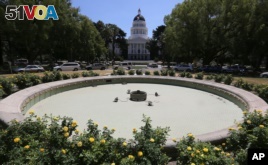 In this photo, taken July 21, 2014, is the unused water fountain located across the street from the state Capitol in Sacramento, Calif. The fountain was drained for repairs, but due to the drought, the repairs and refilling the fountain have been delayed. (AP Photo/Rich Pedroncelli)

Prices for California farm produce are rising. As further proof of the crisis, farmers in the usually fertile Central Valley are not planting their fields.

Dan Errotabere grows pistachio and almond nuts, garlic, wine grapes and other crops near the city of Fresno. He depends on ground water, which he pumps himself. But the amount of water he can receive from the state has fallen to zero. He says the results of the drought are shocking.

Doug Parker is a water policy expert with the California Institute for Water Resources at the University of California. Mr. Parker says the water system has fallen behind in meeting the state's needs. He says the climate and water sources are both experiencing more changes now than in the past.

"What we do know from the climate change data is that we're going to get more droughts and we're also going to have more flood-type years, as well. So we need to be able to build a system and have a system that adapts to that variability in water."

A few California communities are now depending on emergency water supplies. Voters will be asked in November to pay for improvements to the water system. They will vote on whether or not to approve a seven- billion-dollar bond measure. Critics say that is too much to spend. They say it would not solve the problem.

Jeffrey Kightlinger of the Metropolitan Water District of Southern California supports the bond proposal. He says the Los Angeles area and the rest of the state need to be more intelligent about water.

But other people say that California needs to completely reform its water system. They say it needs to find a way to provide for the growing need for water.

*This report was based on a story from VOA reporter Mike O'Sullivan. Jeri Watson wrote it for VOA Learning English. George Grow was the editor.

fountains – n., ornamental structures in a pool or other water from which water is pumped into the air

unprecedented – n. not done or experienced before

conservation – n. the protection of animals, plants and natural resources

sources – n. someone or something that provides what is wanted or needed

resources – n. a supply of something a country has that someone has and can use when it is needed

sustainable – adj. able to be used without being completely used or destroyed