Update Required To play the media you will need to either update your browser to a recent version or update your Flash plugin.
By Alice Bryant
23 November, 2018

The Associated Press reports that the wildfire, known as the "Camp Fire," was 95 percent contained Thursday. It has been blamed for more than 80 deaths. Three other people died in a second major fire near the city of Los Angeles.

State officials are using DNA tests in an effort to identify those killed by the Northern California wildfire. DNA is a substance that carries genetic information in the cells of plants and animals. The testing tool produces results in just two hours. 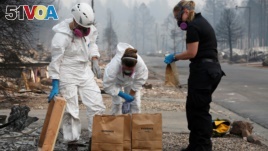 The test, called Rapid DNA Identification, can examine DNA from small pieces of bone or other human remains. It then compares it to genetic material provided by relatives of the missing individuals.

But the technology depends on people willing to volunteer their DNA for testing. And there have not been nearly as many volunteers as officials had hoped for.

The Camp Fire destroyed the town of Paradise and caused heavy damage to nearby areas. As of Thursday night, at least 84 people were confirmed dead. And the official list of those missing had about 700 names.

The Associated Press noted Wednesday that only about 60 people had provided DNA samples to area laboratories. That number came from Annette Mattern, a representative of ANDE – the company that donated the technology.

Mattern said, "We need hundreds. We need a big enough sample for us to make a positive identification on these and to also give a better idea of how many losses there actually are."

Differences in information, the inability of relatives to travel to Northern California and mistrust of the government may be keeping the sample number low.

Tara Quinones says she had not heard from her uncle, David Marbury, for eight days before she drove from the San Francisco area to give a DNA sample. A worker took samples from her skin and inside her cheek and then asked questions about who she was looking for and their relationship.

The owner of her uncle's home confirmed the house burned down. The uncle's car was still on the property.

But Quinones had no idea if any remains were found. She said giving her DNA sample is the one way she could help find her uncle.

Like Quinones, some people have offered their DNA after learning about the identification effort. Others offered it after officials told them that remains from a probable family member had been found.

Mattern said it has been surprisingly easy to get DNA from the remains of those who died in the fire.

ANDE won a contract in 2009 to do research and development for federal government agencies. The company's technology has been used in test programs for many years.

But this is the first time ANDE has helped identify victims after a natural disaster. The company has donated seven machines and over 10 workers to the effort.

Mattern said local law enforcement officials are seeking a way to make it easier for families who live outside northern California to provide samples.

Local law enforcement and the company have said that the DNA samples would be destroyed once they are no longer needed.

Kathleen Ronayne reported this story for the Associated Press. Alice Bryant adapted the report for VOA Learning English. George Grow was the editor.

positive – adj. sure or likely; hopeful

contract – n. an agreement between two or more persons or sides

uncle – n. the brother of someone's father or mother; the husband of the sister of a parent

cheek – n. skin inside the mouth