Update Required To play the media you will need to either update your browser to a recent version or update your Flash plugin.
By VOA
06 August, 2014
51VOA听写整理，转载请注明出处。文本仅供参考，欢迎纠错！

From VOA Learning English, this is The Making of a Nation.  I'm Kelly Jean Kelly.

In 1847, California became a US territory. Most Americans at the time lived on the East Coast. But thousands traveled west to California after a settler reported finding gold there.

James Marshall found the gold nugget in January 1848.  Mr. Marshall was building a sawmill near the American River in central California.  When he looked in the water, he saw shiny pieces of metal.  One of them was about the size of a fingernail. Mr. Marshall took the piece and put it in his mouth. 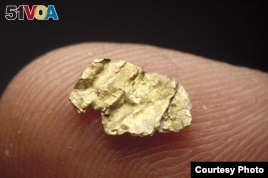 This nugget is believed to have started the California gold rush. Courtesy of the Smithsonian's National Museum of American History.

"And you can see Mr. Marshall actually bit down on it.  You can see the molar marks, his bite mark on it as well a little chip taken out of the upper left hand corner for assaying, or testing the purity of the gold."

Mr. Marshall knew he found gold because the metal was soft.  He and his boss gave the nugget to the US government to prove they found gold on the land.

News of James Marshall's discovery traveled to the East Coast.  But communication was slow in the middle of the 19th century.  People in the big eastern cities of New York and Boston heard only rumors about gold in California.  It was not until December 1848, almost a year after Mr. Marshall's discovery, that President James Polk told Congress the rumors were true.

During the next weeks and months, thousands of young men from the Northeast left their homes and families to seek great riches in California.

"You didn't really have to work for it, as far as they knew.  You just had to lean over and pick it up and you were rich."

One of those young men was Benjamin Buckley.  His records suggest he found thousands of dollars' worth of gold.  Buckley put some money in banks and sent some to family members.

Alexander Van Valen, however, was not as successful.  The Smithsonian's Museum of American History has letters he wrote to his wife and daughters in New York.

"His wife tried to make a living by sewing and borrowing money from the financiers against her husband's future profits.  But it wasn't any easier for her than it was for her husband 3,000 miles away in California."

Most people who traveled to California to find gold were like Van Valen – they did not get rich.  But Paul Johnston says the California Gold Rush was important for other reasons.

"The Gold Rush really put California on the map.  It made it desirable.  It made the East Coast really want California to become part of the U.S.  So, it was huge."

fingernail (n.) - the hard covering at the end of your fingers

molar (n.)  - a large tooth near the back of the jaw with a wide surface used especially for grinding food

rumor (n.) - information or a story that is passed from person to person but has not been proven to be true