Investigators say the husband and wife who killed 14 people in Southern California last week planned the attack for as long as a year.

They say Syed Rizwan Farook and his wife Tashfeen Malik practiced shooting at several gun ranges. They got a $28,500 bank loan, knowing they would not repay it, officials say. The two were killed in a shootout with police, and the loan money was for their 6-month-old daughter, officials say.

Investigators say Farook and Malik had been radicalized for a long time, but there is no proof of links to a terrorist group. The U.S. Federal Bureau of Investigation is considering the shooting an act of terrorism. 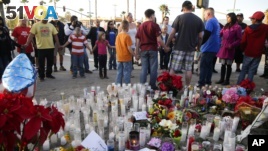 People pray at a memorial to honor the victims of Wednesday's shooting attack, Dec. 5, 2015, in San Bernardino, Calif.

On Facebook, Malik said she was loyal to a leader of the Islamic State terrorism group. And Farook had communicated with people linked to terror groups.

On Monday, Republican presidential candidate Donald Trump called for a temporary ban on Muslims entering the United States. His ban included Muslims who are American citizens.

He called for a "total and complete shutdown" of Muslims entering the United States "until our country's representatives can figure out what is going on." He said many Muslims have expressed what he called "great hatred" for Americans.

Suzanna Sherry is a professor at Vanderbilt University in Tennessee. She said the plan is "discrimination on the basis of religion, which is prohibited by the Constitution."

Kevin R. Johnson is the head of the law school at the University of California, Davis. He called the plan hostile to the Constitution. He said it may violate the part of the Constitution that calls for all to receive equal protections.

Jonathan Turley is a legal scholar at George Washington University. On his blog, he said Trump's plan would violate many American and international protections. He told VOA that "instead of being a country that has long defended religious freedom, (the United States) would become the scourge of religious freedom."

Akhil Reed Amar is a professor at Yale University law school. He has written books on the U.S. Constitution. He said "Donald Trump is dividing us along religious lines. That's un-American."

But not all legal experts believe the plan is unconstitutional.

Peter J. Spiro is a professor of immigration and constitutional law at Temple University. He published an opinion column Tuesday in the New York Times newspaper. He wrote that Congress has a lot of power in setting immigration rules.

He said "Congress regularly makes rules that would be unacceptable if applied to citizens." And he noted that the Supreme Court has historically deferred to the decisions of Congress in immigration issues.

He said he does not like Trump's plan, but that does not determine if something is constitutional. If Trump becomes president, he could put the plan in place without congressional approval, Spiro says. President Obama has used this power to ban human rights violators from entering the country, he says.

Speaker of the House Paul Ryan and other top Republicans criticized Trump's plan. They want voters to know that the Republican Party does not agree with Trump.

However, Republican presidential candidate Senator Ted Cruz told reporters he was happy that Trump was "focusing America's attention on the need to secure our borders." He said he disagreed with Trump's plan.

The U.S. has welcomed Cubans as political refugees, but tried to block Haitians as economic refugees.

After the terrorist attacks of September 11, 2001, the government placed limits on males, 16 and older, who come from 25 mostly Muslim countries.

VOA's Carol Guensburg reported on this story from Washington. Christopher Jones-Cruise adapted her report for Learning English. Kathleen Struck was the editor.

range – n. a place where people can practice shooting guns

radicalize – v. to cause (someone or something) to become more radical -- especially in politics

prohibit – v. to order (someone) not to use or do something

scourge – n. someone or something that causes a great amount of trouble or suffering

defer to – v. to agree to follow (someone else's decision, a tradition, etc.)

focus – v. to cause (something, such as attention) to be directed at something specific (+ on)