California Launches Effort to Examine How to Regulate Cryptocurrency

Update Required To play the media you will need to either update your browser to a recent version or update your Flash plugin.
By Bryan Lynn
08 May 2022


California has become the first American state to launch an official effort to examine how to regulate digital monies.

A cryptocurrency is a form of money that does not exist in physical form. Governments and banks do not oversee it. A network of computers records cryptocurrency activity between users. This activity is included in a "ledger," or list, known as the blockchain. 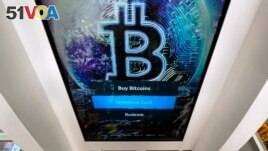 In this Feb. 9, 2021, file photo, the Bitcoin logo appears on the display screen of a cryptocurrency ATM at a store in Salem, N.H. (AP Photo/Charles Krupa, File)

California has the largest economy in the United States. Officials see the state as a good candidate for developing cryptocurrency and blockchain technologies.

Dee Dee Myers is a top economic advisor to Governor Newsom. She told The Associated Press she thinks the technologies can be "an explosive creator" of new companies and jobs in California. She added that since the industry is still developing, it provides "another reason we want to engage early."

Governor Newsom, a member of the Democratic Party, said in a statement that governments often fall behind in technology development. "So we're getting ahead of the curve on this." He added that his order is designed to start a process that aims to help citizens and businesses gain economically from cryptocurrencies.

California has a population of about 39 million people. The state's economy is worth more than $3.1 trillion, larger than those of Britain and India. Newsom said the state hopes to "establish a comprehensive, thoughtful, and harmonized regulatory and business environment" for cryptocurrencies.

The use of cryptocurrencies has sharply increased in recent years. An estimated 16 percent of American adults have invested in, traded, or used cryptocurrencies, the AP reports. The percentage is much higher among younger individuals.

There is much debate over the legitimacy of cryptocurrencies, even among some of the world's wealthiest people. Tesla and SpaceX chief Elon Musk is a strong supporter of the technology. But billionaire investor Warren Buffet recently said he would not pay even $25 for all of the world's bitcoin, the most popular cryptocurrency. Each bitcoin is currently valued at about $37,000, but the rate rises and falls greatly.

Hilary Allen is a financial regulation expert and professor at American University in Washington, D.C. She told the AP that California's effort can help legitimize the technology and make it more widespread.

However, Allen said California's move to expand and regulate cryptocurrencies may not be the best thing for the state and its population. She said one reason for this is that private investors are most likely to benefit from the technology.

Allen urged state officials to seek simpler technological solutions, rather than turning to technology that, in her words, "is by its very nature complex and inefficient."

regulate – v. to control an activity or process, especially by using rules

get ahead of the curve – phr. to be the first to do something that later becomes generally popular

harmonize – v. to be suitable together, or to make different people, plans or situations suitable for each other