Update Required To play the media you will need to either update your browser to a recent version or update your Flash plugin.
By Ashley Thompson
02 August, 2018

California's Death Valley may have just set a world record for hottest month ever.

The area's average temperature for the month of July was 42.28 degrees Celsius. That is higher than the earlier world record, set last July in Death Valley as well.

Todd Lericos, a weather expert for the National Weather Service, said the record beat last year's record by "quite a bit." He added that the data still needed to be further examined before going into official record books.

The temperatures are measured at Furnace Creek in Death Valley National Park.

Death Valley got its name from a group of pioneers who became lost there in 1849 and 1850. They feared they were all going to die, the National Park Service says. And one person in the group did before the rest found their way out.

In the springtime, Death Valley National Park bursts to life with visitors who come to see the desert wildflowers. But by May, Death Valley is already extremely hot, the National Park Service says. Visitors from around the world still come, but not to see the blooms. Instead, they want to experience one of the hottest places on earth.

Summer heat there is so extreme that travelers are warned to drink at least four liters of water each day, carry extra water in their cars, stay close to their vehicles, and watch themselves and others for signs of heat illness. 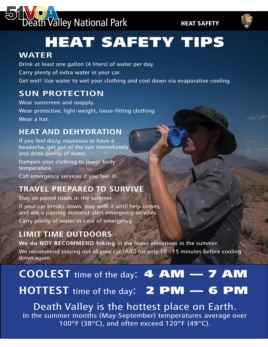 Summer visitors are urged to "travel prepared to survive," avoid hiking at low elevations and return to their air-conditioned cars after just 10 to 15 minutes of being outside.

The Associated Press reported this story. Ashley Thompson adapted it for Learning English, with additional materials from the National Park Service. Kelly Jean Kelly was the editor.

quite a bit - expression a fairly large amount : a lot

further - adv. to a greater degree or extent

pioneer - n. someone who is one of the first people to move to and live in a new area

bloom - n. the flower part of a plant

hiking - n. the act of walk a long distance especially for pleasure or exercise

consecutive - adj. following one after the other in a series: following each other without interruption

elevation n. the height of a place